Before his position with Foundation Medicine, Dr Palmer led the development of the Oncotype DX® Breast Cancer Assay for Genomic Health.

In recent years, Foundation Medicine has sequenced hundreds of breast cancer tumors. “I looked at the first 50. No two genomic reports were identical,” he noted. “There are 50 different genomic patterns in those breast cancers, which gives you an idea of the precision that we are dealing with.” 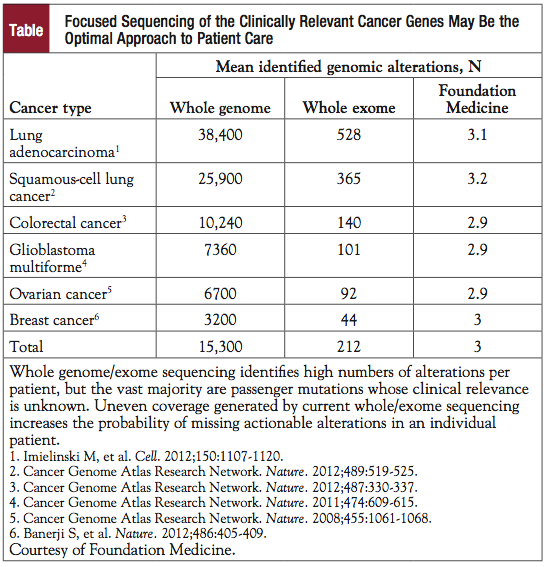 Why the Current Testing Model Is Not Sustainable

Under the new paradigm, cancer is no longer described by its tumor of origin, but by its molecular characteristics – and increasingly by its genetic mutations. Given the increasing number of mutations identified per tumor, the current method of genetic testing is not comprehensive enough, according to Dr Palmer.

Most oncologists now order specific panels. The lung cancer panel, for example, tests for abnormalities in EGFR, KRAS, ALK, and ROS1. “The problem is that the number of impor­tant alterations is increasing, and you won’t be able to send little pieces of tissue for 20 individual tests,” he explained. “Also, there is no reason to think that these 4 alterations represent all we need to know about lung cancer. We would miss all the other potential alterations if we just tested for those. The current model isn’t sustainable.”
Whole-genome sequencing has identified a mean number of 15,300 genomic alterations per patient (Table), but the vast majority are passenger mutations whose clinical relevance is unknown; the current method is also likely to miss several actionable alterations in individual patients, many of which are proving to be unpredictable. For example, Foundation Medicine research has shown that HER2 amplifications and mutations occur in many solid tumors, not just breast and gastric, and that many patients with such tumors have responded to anti-HER2 agents.

The FoundationOne pan-cancer, next-generation sequencing assay identifies actionable alterations in tumors that usually would not have been identified by the panel type of approach that is currently being used. The test, which runs on paraffin-embedded tissue, hunts for the presence of 236 genes known to be cancer drivers. Although the assay identifies on average 1800 alterations per tumor, approximately 10 are deemed important. The test, therefore, weeds out approximately 1790 useless genes per sample, primarily single nucleotide polymorphisms and passenger mutations.

In 23% of the tumors, however, no actionable alteration is found. Of this 23%, an alteration can be identified in 14% of tumors, but a targeted treatment is currently lacking; for the other 9%, no alteration is identified.

“We separate the wheat from the chaff, and we come up with driver alterations that we report to the oncologist,” Dr Palmer said. “Most impor­tant, we report the data in a way that makes sense to the physician and that supports the use of a particular targeted therapy. Focused sequencing of the clinically relevant genes may be the optimal approach for patient care,” Dr Palmer suggested (Figures 1 and 2).
Page 1 of the report lists the alterations and the potential actions – that is, the use of a US Food and Drug Administration (FDA)-approved drug on label or off label, or the use of a clinical trial. Additional pages of the report provide background and content.

Hundreds of physicians have been using the FoundationOne test for the common solid tumors, and for rare tumors, for which treatments are lacking. “There is no tumor type yet where I would say that we don’t stand much chance of finding anything of value,” Dr Palmer added. A summary of findings and treatment outcomes from the first 2223 patients are expected to be reported at the 2013 annual meeting of the American Society of Clinical Oncology. 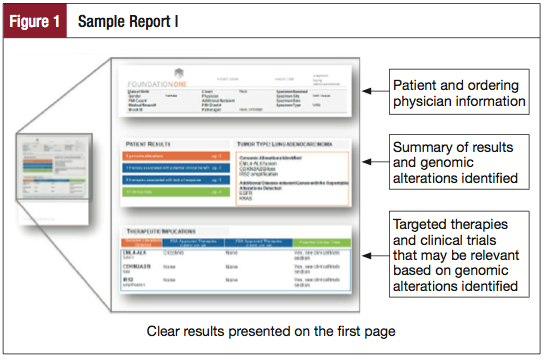 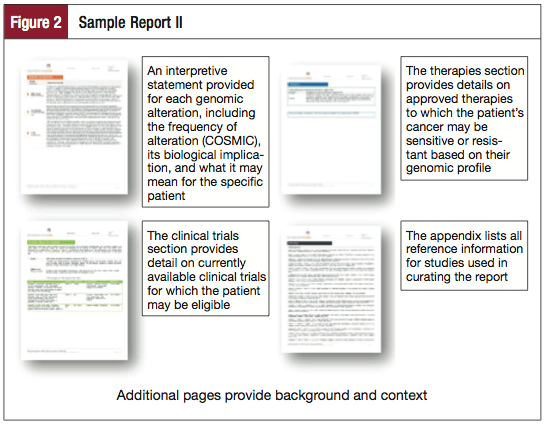 The next step is to optimize the reporting of treatments that are employed and their outcomes, for which a registry has been initiated. Because randomized controlled trials will never be conducted on these very small genetic subsets, the aggregation of rare mutations can generate a database that will be very informative for oncologists whose patients fit these rare profiles.

“We are heavily invested in getting this information and allowing physicians to use it,” Dr Palmer said.
The availability of molecular testing on this scale leads to the question of which patients should have these tests, because there will be cost implications, he noted. In one scenario, the test is ordered after patients have exhausted their current treatment options. In the other scenario, the test is used after a metastatic diagnosis, which could spare patients futile chemotherapy. “The economic implications would be different,” Dr Palmer pointed out.

The test also raises the question of off-label drug accessibility in the absence of randomized trials. “It’s one thing to find a target, and another to get the drug off label from the insurance company,” he added.

Dr Palmer described several good outcomes that have resulted from the FoundationOne test. One patient was a 43-year-old never-smoker who developed lung cancer. The Vysis ALK Break Apart FISH Probe Kit, an approved companion diagnostic for the anaplastic lymphoma kinase (ALK) mutation, was negative. Testing for the epidermal growth factor receptor by polymerase chain reaction was also negative. The patient was started on chemotherapy, but this was ineffective. His physician contacted Foundation Medicine based on the clinical suspicion of a treatable oncogenic driver mutation.

The test identified an ALK rearrangement involving intron 19. Unlike the echinoderm microtubule-associated protein-like 4-ALK rearrangement, which occurs in approximately 5% of patients with non–small-cell lung cancer, this particular mutation has not been reported in the literature. The patient was started on crizotinib, to which he continues to respond at 9 months.

Interview with the Innovators - September 23, 2013

Utilizing a Personalized Diagnostic in a Class of Hodgkin Lymphoma Patients:

To PARP or Not to PARP – What Is the Question? Perspective on the First “Disappointment” With a New Drug Class

The proposition appeared simple – as it turns out, deceptively so. The oncology community was a bit disheartened when the much anticipated results of a phase 3 trial by Dr Joyce O’Shaughnessy did not replicate the success of her phase 2 study1 in which the PARP inhibitor iniparib was used [ Read More ]