Personalized Therapy in the Management of Myelodysplastic Syndromes (MDS)

At the 2012 conference of the Global Biomarkers Consortium, which took place March 9-11, 2012, in Orlando, Florida, Gautam Borthakur, MD, from The University of Texas MD Anderson Cancer Center in Houston, Texas, discussed the use of personalized therapy in the management of MDS.

The myelodysplastic syndromes (MDS) are a group of hematopoietic stem cell disorders characterized by ineffective hematopoiesis.1 Interstitial 5q deletions [del(5q)], present in 10% to 15% of patients with MDS, are the most frequent chromosomal abnormalities in MDS.1 MDS progress to acute myeloid leukemia (AML) in about 30% of patients after various intervals from diagnosis and at variable rates.2 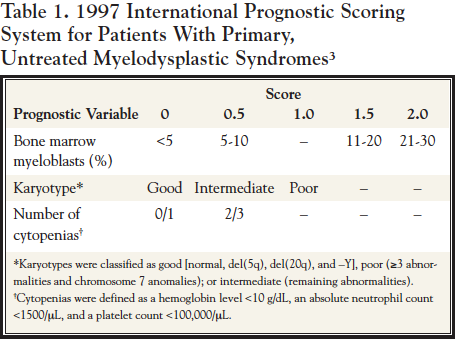 The original International Prognostic Scoring System (IPSS) for MDS, published in 1997 and based on information from 816 patients with MDS, has been used to classify patients with primary, untreated MDS into 1 of 4 risk groups: low risk, intermediate-1, intermediate-2, and high risk regarding the likelihood of survival and progression to AML (Table 1). In this scoring system, risk is determined by the percentage of bone marrow myeloblasts, cytogenetics, and the number of cytopenias. Karyotypic lesions were divided into 3 categories: good [normal, del(5q), del(20q), and –Y], poor (≥3 abnormalities and chromosome 7 anomalies), and intermediate (remaining abnormalities). Cytopenias were defined as a hemoglobin level <10 g/dL, an absolute neutrophil count (ANC) <1500/μL, and a platelet count <100,000/μL. Using this scoring system, patients with lower-risk MDS (ie, low-risk or intermediate-1–risk groups according to the 1997 IPSS) account for approximately 70% of patients with the disease.3 According to the 1997 IPSS, the patient in this case would be classified as low risk, since he had only 1 cytopenia, hemoglobin <10 g/dL, and his karyotype, del(5q), was classified as “good.”

Since the publication of the IPSS in 1997, knowledge concerning the epidemiology and pathobiology of the MDS, including the prognostic impact of cytogenetic abnormalities, has increased substantially. It is now recognized that the 1997 IPSS oversimplified the true biologic heterogeneity of this group of disorders because it omitted rare abnormalities or combinations of lesions.4 Because of this, new prognostic scoring systems have been proposed. For example, Schanz and colleagues recently published a new comprehensive cytogenetic MDS scoring system based on 2902 patients. In this system, 19 cytogenetic categories were defined and then classified according to 5 prognostic subgroups.5 In addition, a revised IPSS (IPSS-R) has been developed that analyzes MDS patient prognosis more precisely than the initial IPSS by defining 5 rather than the 4 major prognostic categories in the original IPSS and including 5 rather than 3 cytogenetic prognostic subgroups.6 Retained in the IPSS-R are the importance of clinical features, such as cytopenias and percentages of myeloblasts, indicating that although cytogenetics are critical in assessing MDS prognosis and potential for progression to AML, they are only a part of the clinical and laboratory evaluation that determines risk. As with the 1997 IPSS, these newer prognostic systems are applicable only to patients with primary, untreated MDS. However, a research group from the MD Anderson Cancer Center has developed and validated a prognostic scoring system for use in patients with established disease.7,8

According to the most recent guidelines of the National Comprehensive Cancer Network for the treatment of MDS, the patient’s IPSS risk category is used in making therapeutic decisions. The guidelines recommend, “[patients] with del(5q) chromosomal abnor­malities and symptomatic anemia should receive lenalidomide.”9 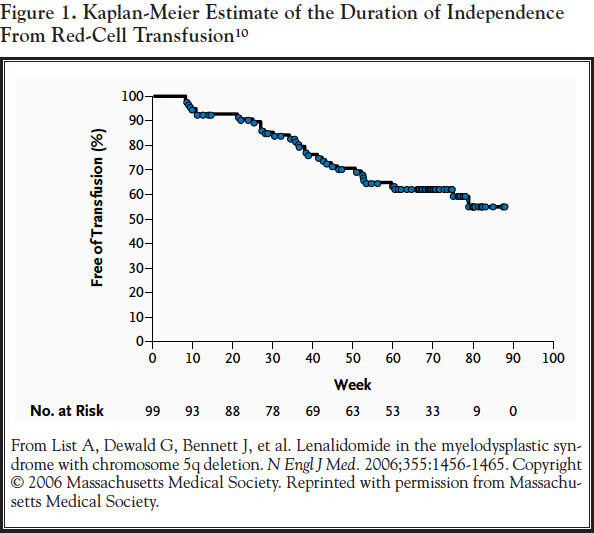 In 2005, the FDA approved lenalidomide, a novel immunomodulatory agent, for use in patients with transfusion-dependent anemia due to low-risk or intermediate-1–risk MDS associated with del(5q) with or without additional cytogenetic abnormalities. The safety and efficacy of lenalidomide were demonstrated in a single-arm, multicenter study in 148 patients with the del(5q) cytogenetic abnormality with or without additional cytogenetic abnormalities.10 Among the 148 patients, 112 (76%) had a reduced need for red blood cell (RBC) transfusions, and 99 (67%) were deemed “transfusion independent,” which was defined as the absence of RBC transfusion during any consecutive “rolling” 56 days (8 weeks) during the treatment period. The median time to response was 4.6 weeks (range, 1-49 weeks). In patients who achieved transfusion independence, the median rise in hemoglobin was 5.4 g/dL (range, 1.1-11.4 g/dL) from baseline. The duration of RBC transfusion independence is shown in Figure 1. Cytogenetic response was assessed by standard metaphase analysis before and after treatment in patients with at least 20 cells in metaphase that could be evaluated in sequential specimens. A complete cytogenetic remission was defined as the absence of cells in metaphase containing any abnormal clone. A partial cytogenetic response was defined as a reduction of at least 50% in the proportion of abnormal cells in metaphase after treatment. Among 85 patients who could be evaluated for cytogenetic responses, 62 (73%) had cytogenetic improvement, and 38 (45%) had a complete cytogenetic remission. The most common grade 3/4 adverse events were neutropenia (54.7%) and thrombocytopenia (43.9%). These results indicate that lenalidomide can overcome the pathogenic effect of del(5q) in MDS and restore bone marrow balance.

The patient in this case was started on lenalidomide 10 mg/day. His ANC and platelet count decreased; his hemoglobin improved. He achieved a complete cytogenetic remission in about 3 months; it was negative by fluorescence in situ hybridization as well. The patient stayed on treatment for about 4.5 years and remained transfusion independent. He actually went back to flying. However, after 4.5 years, the del(5q) returned. His lenalidomide dose was increased to 25 mg/day, and the del(5q) clone size decreased, but the clone never disappeared. Unfortunately, the patient recently returned with full-blown AML with complex cytogenetics in a del(5q) background. Thus, this case illustrates that although lenalidomide is generally effective in patients with low-risk MDS associated with del(5q), it is not curative.

Relationship Between Cytopenias and Response 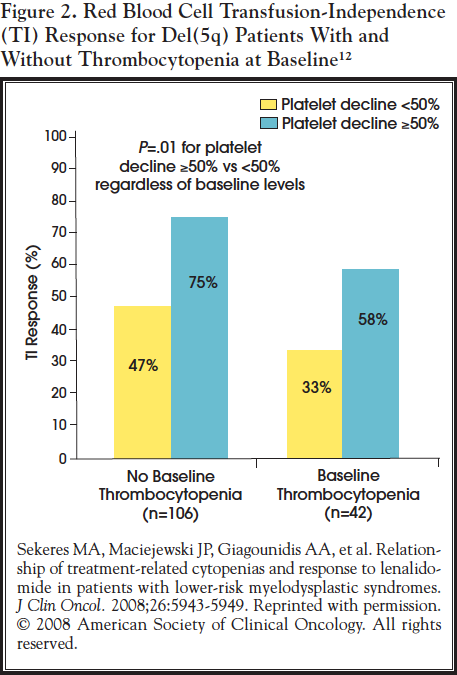 Among patients without baseline neutropenia, 82% of those whose ANC decreased by ≥75% achieved transfusion independence, compared with 51% whose ANC remained stable or decreased by <75% (P=.02). For patients with baseline neutropenia, treatment-related declines in ANC were not correlated with transfusion- independence response (P=.75). Figure 3 compares patients who developed significant treatment-related neutropenia (ANC decline ≥75%) with those who did not (ANC decline <75%).

No relationship between the development of cytopenias and response could be established for lower-risk patients with MDS without del(5q). The authors concluded that a direct cytotoxic effect of lenalidomide specific to the del(5q) clone may be indicative of a transfusion-independence response. 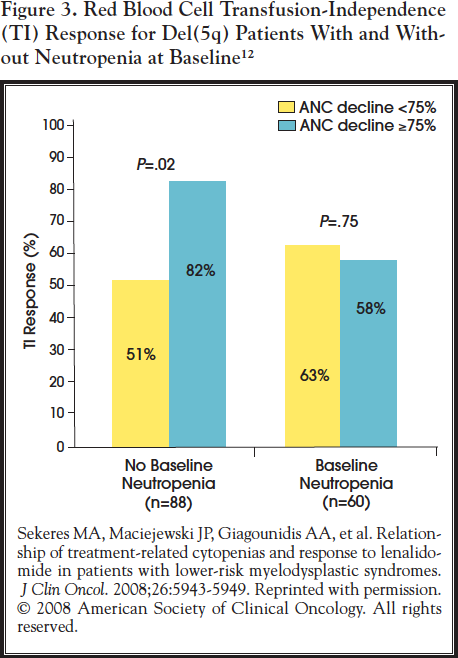 Although specific karyotypic abnormalities have been linked to MDS for decades, recent findings have demonstrated the importance of mutations within individual genes, focal alterations that are not apparent by standard cytogenetics, and aberrant epigenetic regulation of gene expression.13 Bejar and colleagues used a combination of genomic approaches, including next-generation sequencing and mass spectrometry–based genotyping, to identify mutations in samples of bone marrow from 439 patients with MDS. They then examined whether the mutation status for each gene was associated with clinical variables, including specific cytopenias, the proportion of blasts, and overall survival.14 Results showed that somatic point mutations are common in MDS. They identified somatic mutations in 18 genes, including 2, ETV6 and GNAS, that had not previously been reported to be mutated in patients with MDS. A total of 51% of all patients had at least 1 point mutation, including 52% of the patients with normal cytogenetics. Mutations in RUNX1, TP53, and NRAS were most strongly associated with severe thrombocytopenia and an increased proportion of bone marrow blasts. Mutations in 5 genes, TP53, EZH2, ETV6, RUNX1, and ASXL1, were independent prognostic indicators of poor overall survival (Table 3). Nearly one-third of the patients in this study were found to have mutations in 1 or more of the 5 prognostic genes identified. 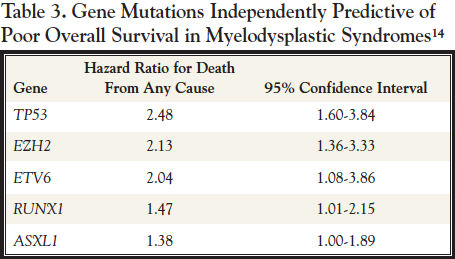 In a separate study, they set out to further define the clinical significance of these mutations in patients with MDS, myelodysplastic/myeloproliferative neoplasms (MDS/MPN), or acute AML evolving from MDS.16
Somatic mutations of SF3B1 were found in 150 of 533 patients (28.1%) with MDS, 16 of 83 (19.3%) with MDS/MPN, and 2 of 38 (5.3%) with AML. There was a significant association of SF3B1 mutations with the presence of ring sideroblasts (P<.001) and of mutant allele burden with their proportion (P=.002). The mutant gene had a positive predictive value for ring sideroblasts of 97.7% (95% confidence interval, 93.5%-99.5%). In multivariate analysis including established risk factors, SF3B1 mutations were found to be independently associated with better overall survival (hazard ratio, 0.15; P=.025) and lower risk of evolution into AML (hazard ratio, 0.33; P=.049). The close association between SF3B1 mutations and disease phenotype with ring sid­ero­blasts across MDS and MDS/MPN is consistent with a causal relationship. The authors concluded that SF3B1 mutations are independent predictors of favorable clinical outcome, and their incorporation into stratification systems might improve risk assessment in MDS.

Both cytogenetic changes and gene mutations play important roles in the pathogenesis of MDS. Patients with del(5q) have a more favorable prognosis than those without this cytogenetic abnormality, and studies have shown that patients with del(5q) are especially responsive to treatment with lenalidomide. Due to advancements in technology such as whole genome sequencing, the number of known mutations occurring in MDS is steadily increasing.17 Mutations such as TP53, EZH2, ETV6, RUNX1, and ASXL1 have an adverse impact on patient overall survival. SF3B1 mutations, on the other hand, are independent predictors of favorable clinical outcome. Early evidence suggests that specific alterations present in individual patients with MDS can predict prognosis and response to therapy. Bejar and colleagues recently stated, “Elucidation of the full complement of genetic causes of MDS promises profound insight into the biology of the disease, improved classification and prognostic scoring schemes, and the potential for novel targeted therapies with molecular predictors of response.”13

Pharmacogenomics in Cancer Care: Adding Some Science to the Art of Medicine