Personalizing Therapy in the Management of Recurrent Non–Small Cell Lung Cancer: Case Study of a Patient With an EGFR Mutation

At the 2013 conference of the Global Biomarkers Consortium, which took place October 4-6, 2013, in Boston, Massachusetts, Roy S. Herbst, MD, PhD, from the Yale Comprehensive Cancer Center in New Haven, Connecticut, discussed the use of personalizing therapy in the management of recurrent non–small cell lung cancer.

A ceiling for cytotoxic chemotherapy for lung cancer was reached in 2002. Shortly thereafter, a mutation in epidermal growth factor receptor (EGFR) was discovered as a driver mutation in advanced non–small cell lung cancer (NSCLC), and therapies targeting this mutation were developed. This mutation is present in up to 40% of Asians with NSCLC.

A 41-year-old Chinese American female presents with right-sided chest wall pain and right abdominal pain. She has never smoked. Her performance status is 1. In 2011, she had stage 1B (pT2a N0 M0) NSCLC with squamous histology treated with right upper lobectomy with no adjuvant treatment.

The benefits of adjuvant therapy in lung cancer are real but small. On this latest follow-up, a recurrence was suspected based on her symptoms and history. A CT scan of the chest and abdomen revealed multiple heterogeneous masses in the liver and spleen and extensive abdominal lymphadenopathy. These findings are compatible with tumor spread within the right pleural space and involving the right hemidiaphragm (Figure). 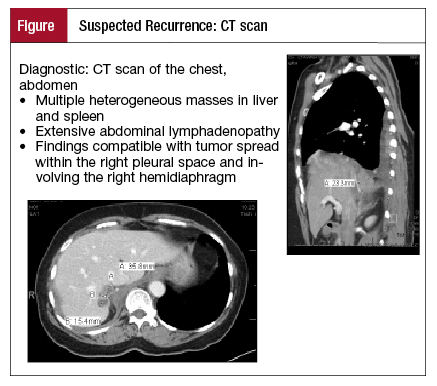 The findings represent profound recurrence 2 years later. “That’s the problem with lung cancer; even when you think you’ve cured it in stage 1B disease, there’s a 40% chance that it will come back,” said Roy S. Herbst, MD, PhD, director of the Thoracic Oncology Research Program and associate director of Translational Research, Yale Comprehensive Cancer Center, New Haven, Connecticut.

Assuming equal procedure risk, which lesion should be biopsied to establish the diagnosis of recurrent cancer?

Any site; it does not make a difference

“We ask the radiologist what he or she wants,” said Herbst. “The one thing you don’t want to do is bone. With personalized therapy and biopsy becoming so common in lung cancer, the radiologists are working more closely with us on the biopsies. In this electronic age, you can e-mail them a record, and they look at it.”

Would you recommend tumor genotyping before initiating systemic therapy for EGFR mutation and ALK fusion?

The EGFR mutation was positive for L858R.

What is recommended first-line therapy in this never- smoking Chinese American patient with lung squamous cell carcinoma and EGFR mutation?

Erlotinib or gefitinib based on EGFR mutation testing

Ignore EGFR mutation testing since this is squamous cell carcinoma. Give a platinum-based doublet

Erlotinib or gefitinib would be the choice until more data with afatinib become available, said Herbst. In lung cancer, even with therapies to target EGFR mutations and ALK rearrangements, the median time to regression is still only 1 year. “Most every patient will become resistant,” he said. “The longest patient I ever had who was treated with an EGFR inhibitor on an off, was about 8.5 years. These are not curative therapies. The tumor will have either preexisting resistance or will develop resistance.”