On April 3, 2014, President Obama signed the Gabriella Miller Kids First Research Act. This act was introduced last year by representatives Peter Welch (D-VT) and Gregg Harper (R-MS) and strongly supported by House Majority Leader Eric Cantor (R-VA). After being introduced, the bill was renamed to include the name of a 10-year-old girl who became an activist for childrenâ€™s cancer research after her diagnosis with brain cancer last year.

The Gabriella Miller Kids First Research Act
The Congressional Research Service, a nonpartisan division of the Library of Congress, offered a summary of this act as follows:

What this boils down to is that the government will divert $12.6 million to the common fund at the National Institutes of Health to support research efforts focused on childhood cancer and other pediatric diseases.

We at Personalized Medicine in Oncology and others in our field are of course delighted to hear of additional research funds made available to advance pediatric cancer care. The extraordinary component of this story, however, is the personal effort of a 10-year-old girl to increase funding for cancer research.

Meet Gabriella
Her name is Gabriella Miller. In November 2012, at the age of 9 years, she learned that she had a walnut-sized, inoperable brain tumor. Despite exhausting chemotherapy and radiation treatments, she quickly became a national childhood cancer advocate and worked to raise money for cancer research through public speaking engagements and through the establishment of a foundation called Smashing Walnuts. A powerful image, Gabriella and her family literally began smashing walnuts with frying pans as a symbolic gesture to support her battle against the tumor.

In the year following her diagnosis, and while undergoing treatments, Gabriella accomplished more than some adults accomplish in a lifetime. She helped raise $275,000 for the Make-A-Wish Foundation, $15,000 for a childhood brain tumor foundation, spoke at a variety of local and national awareness events, and authored a special writing in a childrenâ€™s book about cancer, Beamer Learns About Cancer, by Cindy Chambers, which was released in September 2013.

Gabriella recently lost her battle to cancer, but she remains an inspiration. She encouraged people to carry on the battle, suggesting that we will â€świn the warâ€ť even in her absence.

Pediatric Cancer Statistics
We are now rapidly approaching 16,000 kids diagnosed with cancer annually. For 2014, the American Cancer Society has estimated 15,780 new cases of pediatric cancer. This number has increased from the estimated 12,500 children diagnosed in the year 2008. Cancers that are most common in children 0 to 14 years of age are acute lymphocytic leukemia (26%), brain and central nervous system (CNS) (21%), neuroblastoma (7%), and non-Hodgkin lymphoma (6%). The most common cancers in adolescents 15 to 19 years of age are Hodgkin lymphoma (15%), thyroid carcinoma (11%), brain and CNS (10%), and testicular germ cell tumors (8%). The most common solid tumors are brain tumors.1

Recognizing an Advocate for Pediatric Research Funding
To provide families with hope for better, more effective treatments, researchers need more funding. This is what Gabriella implored our government to do â€“ invest in research. In recognition of his efforts to do just that and his leadership in getting the Gabriella Miller Kids First Research Act passed, House Majority Leader Eric Cantor received the 2014 Childrenâ€™s Advocacy Award at the annual Childrenâ€™s Ball to benefit Childrenâ€™s National Health System. Mr Cantor was quoted, â€śDoctors, nurses, and researchers at Childrenâ€™s National do outstanding work on behalf of children and their families every day. Providing quality care to children so that they can live brighter and healthier lives is a top priority. Over the last year, the Congress has advanced important legislation that puts kids first, including the PREEMIE Act, the Childrenâ€™s Hospital GME Support Reauthorization Act, and the Gabriella Miller Kids First Research Act. I am committed to continue working together to find treatments and cures for our kids. It was an incredible honor to receive the Childrenâ€™s Advocacy Award, and I will keep working to build support for pediatric research so we can help more children.â€ť

How to Help
To make a tax-deductible donation to the Smashing Walnuts Foundation, you can visit their website at www.smashingwalnuts.org. 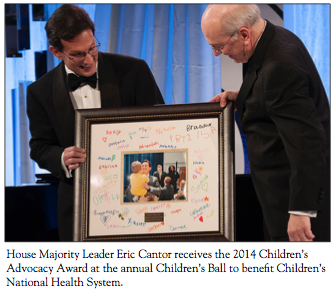 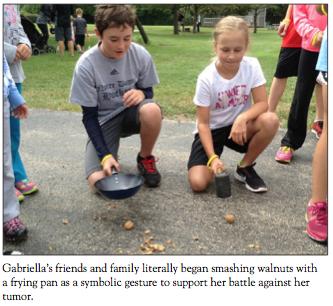 Perspectives on the Landscape of Personalized Medicine

The Affordable Care Act: Where Are We Now, Whatâ€™s the Future?

The Affordable Care Act (ACA) is in its infancy, but it is already changing oncology practice, said panelists during a roundtable discussion at the 2014 meeting of the National Comprehensive Cancer Network (NCCN). The changing composition of oncology patients, the risk pool of the exchanges, new payment and reimbursement models, [ Read More ]