At the 2012 conference of the Global Biomarkers Consortium, which took place March 9-11, 2012, in Orlando, Florida, Charles Schiffer, MD, from the Barbara Ann Karmanos Cancer Institute and Wayne State University in Detroit, Michigan, discussed the management of myeloproliferative neoplasms.

Major advances in understanding the biology of hematologic malignancies, such as the unraveling of the molecular pathophysiology of BCR-ABL and studies of the mechanisms of resistance in Philadelphia chromosomeÂ­â€“positive chronic myeloid leukemia, have resulted in the rapid development of multiple selective BCR-ABL tyrosine kinase inhibitors (eg, imatinib, nilotinib, dasatinib), which improved 10-year survival from the historic experience of approximately 20% to an estimated rate of 85%.1
In the case study of a patient with myelofibrosis that follows, the role of inhibition of the JAK2-mutated signaling pathway is discussed.

The World Health Organization classification system for myeloid malignancies lists 8 disorders in the category of myeloproliferative neoplasms (MPNs), including the so-called â€śBCR-ABL1â€“negative MPNâ€ť: polycythemia vera, essential thrombocythemia, and primary myelofibrosis.2 The MPNs (previously referred to as myeloproliferative disorders) are clonal disorders arising in a pluripotent hematopoietic stem cell.3 The MPNs are rare diseases.4 The annual incidence of
myelofibrosis ranges from 0.2 to 1.5 cases per 100,000
individuals.5,6

The majority of patients with myelofibrosis experience splenomegaly, which can lead to portal hypertension or splenic infarcts,7 and cytopenias.8 In addition, progressive splenomegaly is associated with an increased risk of transformation to secondary acute myeloid leukemia,9 which has a poor prognosis (ie, median survival is 2.6 months after transforming to blast phase).10 Symptoms related to splenomegaly (ie, early satiety, abdominal pain) can also impair physical function, such as walking, bending, eating, or breathing.11 Anemia, which is prevalent among those with myelofibrosis, is prognostic of decreased survival.12 Myelofibrosis is also characterized by fatigue, night sweats, pruritus, bone and muscle pain, and unintentional weight loss â€“ all of which impair quality of life.11,13,14 The median survival time for patients with myelofibrosis ranges from 2 to 11 years; high-risk patients show a rapid progression of the disease and a median survival time of 12 to 24 months.12,15

Most of the traditional therapies for myelofibrosis are palliative and have demonstrated limited efficacy in the management of splenomegaly, cytopenias, or the often debilitating symptoms associated with the disease.16,17 Hydroxyurea has generally been used as the first-line treatment of myelofibrosis-associated splenomegaly.13 Results from 1 study showed that approximately 30% of patients receiving hydroxyurea achieved a reduction in spleen size.18 However, the duration of response with hydroxyurea is only approximately 13 months, and hydroxyurea treatment is associated with the development and/or worsening of anemia.13 Splenectomy has also been used for the management of splenomegaly; however, in 1 study, splenectomy in patients with myelofibrosis was associated with 9% mortality and 31% morbidity.19 The only potentially curative therapy for myelofibrosis is alloSCT.20 However, the use of alloSCT is restricted to a small percentage of patients, since not all patients are appropriate candidates. Ideal candidates should be young, without comorbidities, with a performance status ?90%, and without peripheral blood blasts.13,21,22

In 2005, 4 research groups,23-26 using different approaches, independently discovered an acquired point mutation in the Janus kinase 2 (JAK2) gene at codon 617 within the JH2 domain, resulting in the substitution of a valine for a phenylalanine (Figure 3).27 Known as JAK2 V617F, this mutation is found in approximately 95% of patients with polycythemia vera, 50% to 60% of those with essential thrombocythemia, and 50% to 60% of those with myelofibrosis.28 The discovery of this mutation, a tyrosine kinase used by hematopoietic cell receptors for erythropoietin, thrombopoietin, and granulocyte colony-stimulating factor, provided an explanation for the shared clinical features of these 3 disorders.3 After the discovery of the JAK2 V617F mutation, hematologists and oncologists expected that specific JAK2 inhibitors could change the natural course of MPNs, as selective BCR-ABL tyrosine kinase inhibitors (eg, imatinib, nilotinib, dasatinib) had done in chronic myeloid leukemia. Therefore, a flurry of research and drug development activity took place in search of JAK2 inhibitors in the hope that the therapeutic paradigm would change from palliation to cure.29 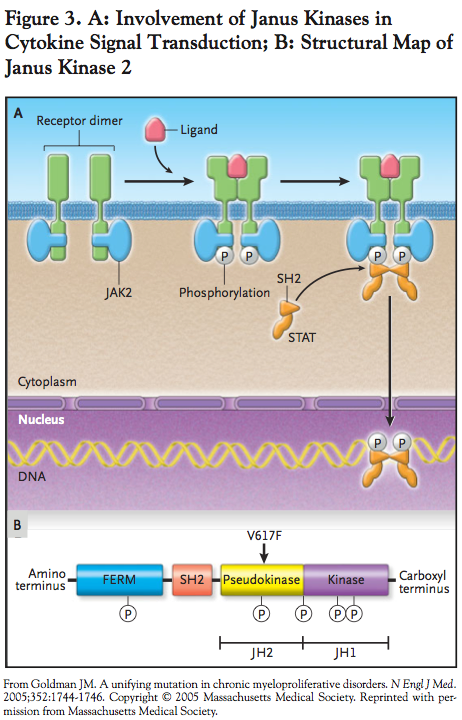 In the first study, conducted by Verstovsek and colleagues, patients with intermediate-2 or high-risk myelofibrosis were randomized to receive twice-daily oral ruxolitinib (n=155) or placebo (n=153).30 As shown in Figure 4, 41.9% of patients in the ruxolitinib group versus 0.7% in the placebo group had a reduction in spleen volume, as assessed by MRI or CT scan, of ?35% at 24 weeks (P<.001). The response was durable and was observed not only in patients having the JAK2 V617F mutation but also in patients with wild-type JAK2.

A reduction in spleen volume was maintained in patients who received ruxolitinib; 67% of the patients with a response had the response for ?48 weeks (Figure 5). 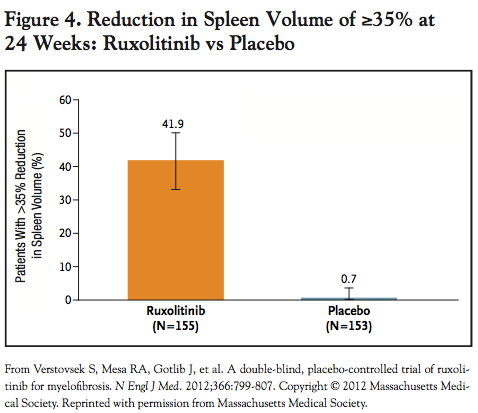 However, in another long-term study, Tefferi and colleagues reported that among 51 patients with myelofibrosis treated long-term with ruxolitinib, 18 patients (35%) had died, and 5 patients (10%) experienced transformation to acute myeloid leukemia.33 No significant difference was seen in the survival rate for the 51 ruxolitinib-treated patients compared with a cohort of 410 patients with primary myelofibrosis who were treated with standard therapy (P=.43). 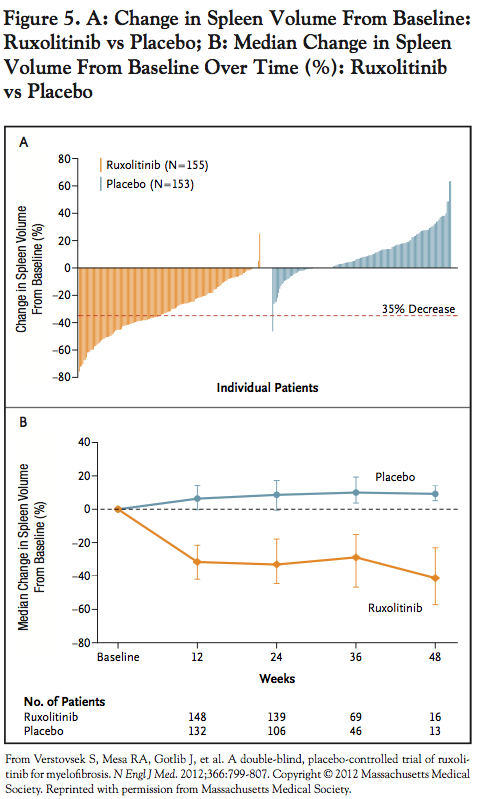 This first JAK inhibitor therapy for myelofibrosis had been long anticipated; however, the value of this treatment is not yet known. Ruxolitinib has been unable to significantly decrease peripheral blood blast count, reverse marrow fibrosis, induce cytogenetic remission, or reduce JAK2 V617F allele burden.15 Other limitations of the drug include hematologic toxicities, especially anemia and thrombocytopenia, and the rapid return of splenomegaly and other myelofibrosis-related symptoms upon the discontinuation of therapy.15 Thus, although ruxolitinib may improve patientsâ€™ quality of life by significantly reducing splenomegaly and disease-related symptoms, it is not curative for myelofibrosis. Therefore, ruxolitinib may play a definite but limited role in the management of patients with myelofibrosis who are not eligible for alloSCT.15 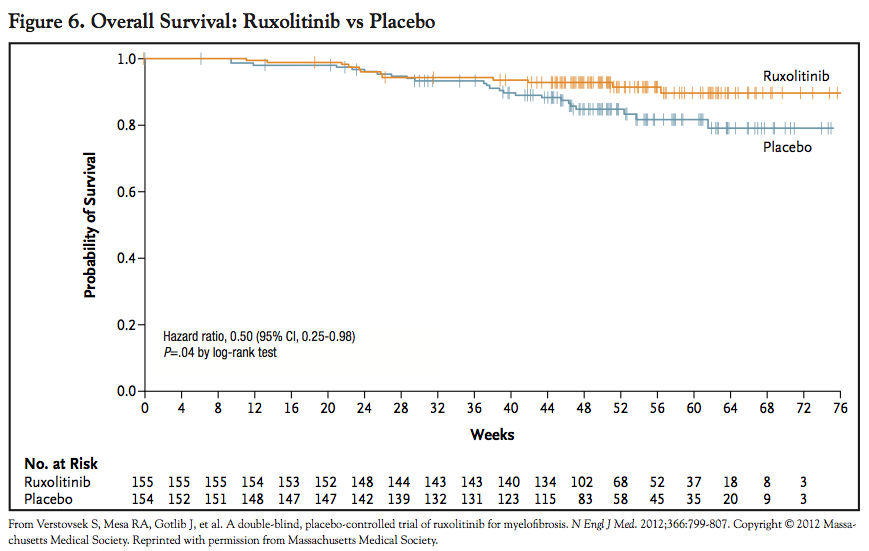 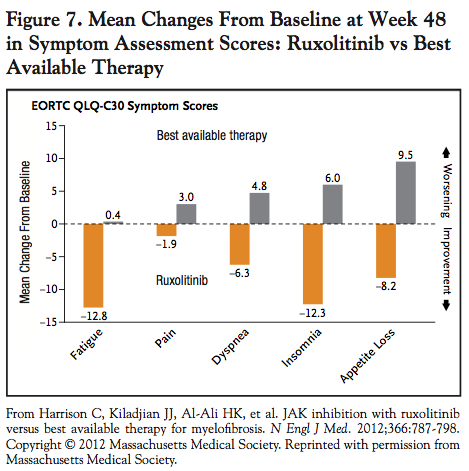 Several new JAK inhibitors are under clinical development for patients with myelofibrosis. For example, SAR302503, formerly known as TG101348, is a JAK2 and FLT3 inhibitor currently under evaluation in a phase 3 placebo-controlled study (JAKARTA). Pacritinib (SB1518) is a JAK2 and FLT3 inhibitor under investigation in a phase 3 study versus best available therapy. CYT387, a JAK1 and JAK2 inhibitor, is undergoing evaluation in phase 2 studies, including a long-term extension study. LY2784544, which has been described as a JAK2 V617F (mutation)-selective inhibitor, is in phase 1/2 studies.13

The MHealth Factor: A Bioinformatics Platform for Arming the Oncology Personalized Medicine Revolution

Personalized medicine (PM) applied to cancer diagnosis and treatment is really all about information: discovering it, synthesizing it, analyzing it, translating it to cancer pathophysiology, and finally sharing it with those who need to know what is going on inside the tumors. The rise of PM skill sets, as I [ Read More ]

Updates to the Clinical Practice Guidelines of the National Comprehensive Cancer Network (NCCN) were presented at the NCCN 18th Annual Conference held in Hollywood, FL, March 13-17, 2013. For most tumor sites, the updates were few and minor, but the NCCN did introduce inaugural guidelines for survivorship. New Guidelines for [ Read More ]