Immunotherapies in Development for Pancreatic Cancer

According to the American Cancer Society, an estimated 48,960 new cases of pancreatic cancer and 40,560 deaths due to the disease were expected to occur in the United States in 2015.1 Survival statistics for pancreatic cancer are bleak: for all stages combined, the 1- and 5-year relative survival rates are 28% and 7%, respectively. Even for the small percentage of people diagnosed with local disease (9%), the 5-year survival is only 26%. More than half (53%) of patients are diagnosed at a distant stage, for which 1- and 5-year survival is 15% and 2%, respectively.1

Surgery, radiation therapy, and chemotherapy are treatment options that may extend survival and/or relieve symptoms in many patients, but seldom produce a cure.1 Less than 20% of patients are candidates for surgery because pancreatic cancer is usually detected after it has spread beyond the pancreas.1 Even among those patients who were thought to be surgical candidates, the cancer has often spread too extensively to be removed. For those who do undergo surgery, adjuvant treatment with the chemotherapy drug gemcitabine lengthens survival.1 For advanced disease, chemotherapy is often offered and may lengthen survival. The targeted anticancer drug erlotinib has demonstrated a slight improvement in advanced pancreatic cancer survival when used in combination with gemcitabine.1

Algenpantucel-L is a pancreatic cancer vaccine that exploits the strong interaction between a natural, ubiquitous human antibody, anti-Gal, and carbohydrate antigens called Î±-galactosyl (Î±-gal) epitopes.2 Anti- Gal, the most abundant antibody in humans, is produced only in humans and Old World primates (monkeys of Asia and Africa). In contrast, all other mammals produce only the specific ligands for anti-Gal and not the antibody. The ligands for anti-Gal are Î±-gal epitopes, which are present on carbohydrate chains of glycolipids and glycoproteins, and for which humans have preexisting immunity.2

Algenpantucel-L is a an irradiated, live, whole-cell vaccine made of 2 human allogeneic pancreatic cancer cell lines (HAPa-1 and HAPa-2) that are genetically modified to express the murine enzyme alpha-1,3-galactosyltransferase, which directs the synthesis of Î±-gal epitopes on surface proteins and glycolipids of such cell lines.3 On injection, algenpantucel-L induces a hyperacute immune response, similar to the hyperacute rejection that is seen with transplantation, against cancer cells.3-5 Algenpantucel-L is being evaluated in a number of clinical studies (Table 1).

A multisite, open-label, dose-finding, phase 2 study of algenpantucel-L in combination with standard-of-care adjuvant therapy (gemcitabine and 5-fluorouracil [5-FU]-based chemoradiotherapy) was conducted in 70 patients with resected pancreatic cancer.6 After a median follow-up of 21 months, the 1-year disease-free survival rate was 62%, and the 1-year overall survival (OS) rate was 86% (Figure 1). The most common adverse events were injection site pain and induration. 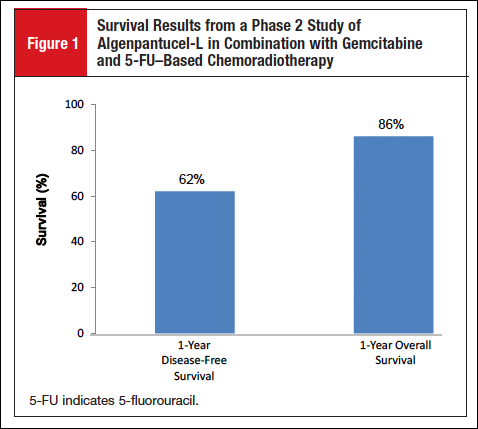 GVAX Pancreas is an irradiated whole-cell modified vaccine composed of 2 irradiated pancreatic cancer cell lines (PANC 6.03 and PANC 10.05) engineered to express GM-CSF, a growth factor that plays a key role in stimulating the immune system response by inducing dendritic cell differentiation. GVAX is being evaluated in a number of clinical studies (Table 2).

Administration of GVAX in addition to standard 5-FUâ€“based chemoradiation as part of adjuvant therapy after pancreatic cancer resection demonstrated promising results in a single-institution phase 2 trial.7 The 1-year disease-free survival rate was 67% and the 1-year OS rate was 85% (Figure 2). 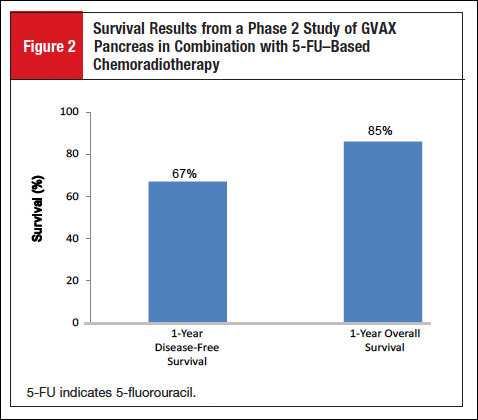 Other studies investigating the immunologic effects of GVAX have demonstrated the vaccineâ€™s ability to create an inflammatory reaction causing an upregulation of programmed death-1 ligand 1, suggesting the potential utility of combining GVAX with immune checkpoint inhibitors.8,9

Mesothelin is a tumor-associated antigen overexpressed in most pancreatic ductal adenocarcinomas. CRS-207 is a live-attenuated Listeria monocytogenes bacteria that has been engineered to express mesothelin. The sequential administration of low-dose cyclophosphamide plus GVAX vaccine alone or followed by CRS-207 was evaluated in a randomized, multicenter, open-label, phase 2a study (NCT01417000) in adults with mesothelin-expressing metastatic pancreatic adenocarcinoma.10 The phase 2a study enrolled 93 patients with advanced-stage metastatic pancreatic cancer who previously received or refused prior chemotherapy, with most patients having received 2 or more prior therapies in the metastatic setting. Results from the phase 2a portion of the study showed that, after a mean follow-up of 6.6 months, the median OS was 6.1 months (95% CI, 4.4-9.2) in the group of patients who received cyclophosphamide/GVAX followed by CRS-207 compared with 3.9 months (95% CI, 2.8-4.9) in the group of patients who received cyclophosphamide/GVAX without CRS-207 (Figure 3).10 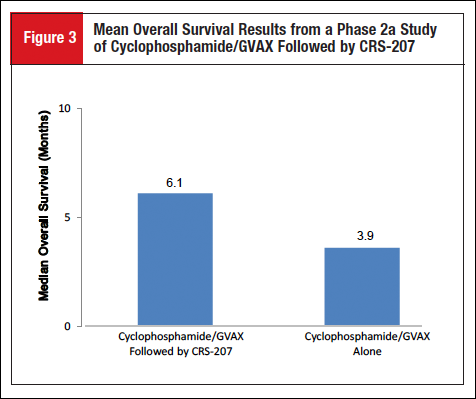 The 1-year survival probability for the group of patients who received cyclophosphamide/GVAX followed by CRS-207 was 24% (95% CI, 14%-36%), compared with 12% (95% CI, 3%-29%) for the group of patients who received cyclophosphamide plus GVAX alone. The most frequent treatment-related grade 3/4 adverse event was asymptomatic, transient lymphopenia (3 patients experiencing grade 3 and 2 patients with grade 4). Enrollment (N = 303) has been completed for a phase 2b study (ECLIPSE; NCT02004262) of cyclophosphamide/GVAX and CRS-207 compared with chemotherapy or with CRS-207 alone in adults with previously treated metastatic pancreatic adenocarcinoma; the estimated primary study completion date is December 2016.

GVAX plus CRS-207 plus Nivolumab

GVAX and CRS-207 are also being evaluated in combination with the checkpoint inhibitor nivolumab in a phase 2 study (STELLAR; NCT02243371) in patients with previously treated metastatic pancreatic cancer.

KRAS mutations are found in more than 90% of pancreatic cancers, resulting in the uncontrolled growth of malignant cells; the majority of KRAS mutations in pancreatic tumor cells are located in codon 12.11,12 GI-4000 is a peptide vaccine targeting cancers caused by a mutation in the Ras protein. GI-4000 is made up of intact, heat-inactivated yeast (Saccharomyces cerevisiae) expressing mutant Ras protein.11 GI-4000 has been evaluated in a double-blind, placebo-controlled, multicenter phase 2 adjuvant study (NCT00300950), in combination with a gemcitabine regimen versus a gemcitabine regimen with placebo, in 176 postresection pancreatic cancer patients whose tumors were RAS-mutation positive.13 Patients were stratified by resection status (R0 [negative resection margins] vs R1 [microscopic tumor infiltration at margins, ie, postoperative residual disease]). Blood taken from patients at sufficient time points throughout the study was assayed for patient immune response by interferon-Îł (IFN-Îł) ELISpot assay. Frequencies of regulatory T-cells (Tregs)â€”measured at baseline (pre-priming injections) and then at time points after GI-4000/placebo treatment began but before gemcitabine was administeredâ€”were measured by flow cytometry (n = 76).

Results showed that, among the group of R1 patients, GI-4000 treatment led to a significantly greater rate of immune response to mutated KRAS than placebo: 7 of 15 (46.7%) versus 1 of 12 (8.3%) patients had an IFN-Îł response to their KRAS codon 12 (G12) mutation (P = .043). In contrast, GI-4000 treatment of R0 patients showed no increase in RAS-mutationâ€“specific IFN-Îł responses compared with placebo: 16 of 52 (30.8%) versus 22 of 50 (44.0%) patients, respectively. However, R0 patients treated with GI-4000 had naive Tregs that were significantly decreased compared with placebo: 11 of 42 (26.2%) versus 3 of 34 (8.8%) patients had a >2-fold decrease in this fraction (P = .048), suggesting an immunotherapeutic effect in R0 as well as R1 patients. Median OS was also greatly improved in GI-4000â€“treated G12R R0 patients compared with placebo-treated G12R R0 patients (median OS = 568 days longer), as was the case for G12R patients versus non-G12R patients receiving GI-4000 (median OS was 773 days longer in G12R patients). When placebo patients were taken alone, there was only a 94-day improvement in median OS for G12R versus non-G12R patients. These observations suggest that the presence of the RAS G12R mutation results in a survival advantage for pancreatic cancer patients, and that treatment with the GI-4000 can further improve immune response and survival for this subset of patients.13

Pancreatic cancer has the poorest prognosis of all malignancies and remains one of the most resistant cancers to traditional therapies.2,3,5 Therefore, innovative approaches to the treatment of this disease are desperately needed. New immune-based therapies show promise in improving survival rates by unleashing antitumor immunity and represent viable options for the treatment of pancreatic cancer.

A Century of Medical Product Regulation: The Historic Framework for Personalized Medicine in Oncology

Progress in personalized medicine is currently taking place within a system of governmental regulation that was largely created before the term was even coined. Todayâ€™s regulatory framework, directed primarily by the Food and Drug Administration (FDA) and a handful of other federal and state agencies, was created incrementally over the [ Read More ]

A panel of 4 blood-derived biomarkers showed promise as an aid to early detection of colorectal cancer (CRC), as reported at the 2016 Gastrointestinal Cancers Symposium.The panel yielded a negative predictive value (NPV) exceeding 90% for CRC, the combination of CRC and high-risk adenomas, and CRC plus other cancers. The [ Read More ]