Although targeted drug development and testing is clearly transforming medicine, resistance to greater uptake of personalized medicine includes a shift in the evidence threshold in personalized testing and drawbacks to the delivery system, including the cost of tests, said Peter Bach, MD, at the Fourth Annual Conference of the Association for Value-Based Cancer Care.

The traditional cancer treatment has an established taxonomy, with the treatment based on an established test and disease characteristics (eg, HER2 amplification and breast cancer). Insurers then work around the lack of specific coding for the test. In the case of breast cancer, UnitedHealthcare instituted a program whereby the results of HER2 testing had to be communicated before trastuzumab treatment would be covered.

The action on the test was stopped until the test results were known, not before the test was performed, said Bach, director of the Center for Health Policy and Outcomes, Memorial Sloan Kettering Cancer Center, New York City. â€śThat matters, and it also matters as we move towards this place where the tests themselves will be expensive. If you put the barricade after the test, then itâ€™s going to have a different effect on utilization than if you do it before.â€ť

The paradigm for cancer drug development, approval, and labeling may eventually change from one based on the organ site of the cancer, the cancer stage, and the cell type to mutation status or biologic pathway. â€śAs we move forward, the FDA has been heavy-handed about saying that weâ€™re going to live in a new age of paired diagnostics,â€ť he said. Crizotinib was the prototype for this model, with the test codeveloped with the pharmaceutical manufacturer within the context of a clinical trial.

According to Bach, however, the age of paired diagnostics may already be over, as the number of required tests and tissue samples becomes cumbersome. â€śWeâ€™re going to rapidly need to do too many assays and look for too many different mutations in any particular organ type for us to stick with a paired paradigm,â€ť he said. â€śI think testing for multiple mutations at the same time in the tumor is where weâ€™re going to end up.â€ť

Building of Evidence
An evidence shift is taking place around personalized testing. The first trend is an evolution in recognizing that not all tests are equivalent. HER2 testing errors occur in about 20% of samples, resulting in misclassification of patients. In addition, there are many flavors of alterations with similar biologic activity (ie, base pair substitutions, deletions, copy number alterations, etc), not simply the alteration that was studied. It is also clear that there is no gold standard in test development.

The targets and compounds number in the hundreds. Tests themselves are becoming a cost center, sometimes running into the thousands of dollars. â€śPayers are noticing the costs of these tests, and theyâ€™re trying to figure out what the standard should be for them,â€ť said Bach.

The tests are opening up a Pandoraâ€™s box in treatment in that any mutation found anywhere could become justification for a trial of treatment. â€śThere is a fear that itâ€™s going to lead to wild experimentation without the capture of data, and I think thatâ€™s a legitimate one,â€ť he said.

Insurers also have operational challenges, he said. Insurers generally cover tests under fairly simple rules that can be administered, such as obtaining a HER2 assay in a patient with breast cancer. But the new multigene tests themselves are complex, as are the clinical scenarios (ie, first, second, or third line of therapy; the indication for the agent being considered; the results of other tests). It is not clear that oncologists will know how to respond to the coming barrage of information.

The appropriate evidence standard remains open, said Bach. Moving from a test result to improved outcome should be one standard, he argued. The evidence for off-label uses of agents should go beyond supposition, but randomized controlled trials are not feasible for every possibility. â€śWeâ€™re probably headed for a case series kind of approach,â€ť he said.

The FDA often approves compounds under accelerated approval based on single-arm studies with surrogate end points â€“ essentially case series. Imatinib, for example, was approved with evidence of cytogenetic changes on sequential case series, and ceritinib was approved on the basis of response rate in a single-arm trial. Disease registries such as those used by Medicare for coverage under evidence development are also fundamentally case series, he said.

â€śThe essential features of [case series/registries] are that they are sequential,â€ť said Bach. â€śThereâ€™s no cherry picking; they enroll all comers.â€ť They capture high-quality data with deep follow-up, with no bias introduced from loss to follow-up or end point evaluation triggered by clinical events. Outcomes otherwise must be known from historical data. 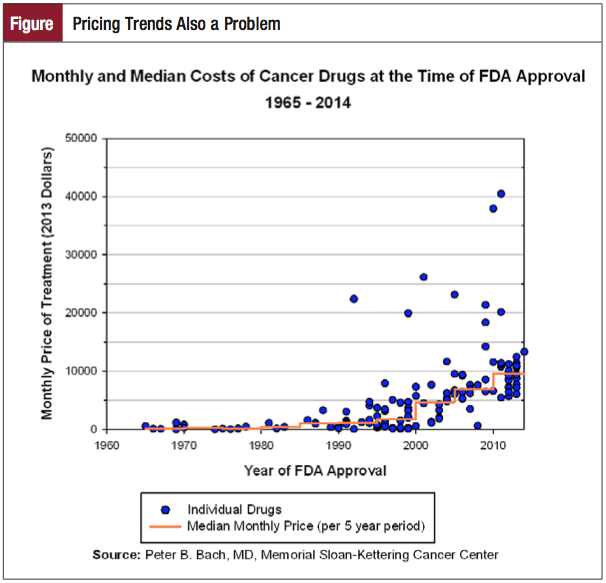 Until evidence is built correctly, the default stance will be very conservative. â€śWe have shown ourselves to be somewhat aggressive about pushing the envelope for using expensive therapies when they are not indicated, so the default is the resistance of 2 opposing forces,â€ť he said.

Pricing trends are also a problem, with monthly and median costs of cancer drugs at the time of FDA approval increasing exponentially over the years. â€śAny issue we have with off-label use of drugs that are targeted is going to get worse as the prices go higher,â€ť he said.

PMO and the PMC â€“ A Collaboration to Advance Precision Medicine

Introducing Dr Edward Abrahams, President of PMC, as the Author of The Last Word Since the inception of Personalized Medicine in Oncology (PMO), we have offered the department The Last Word in which we sum up thoughts on various overriding themes in the world of personalized medicine. In this thought-provoking [ Read More ]

PMO is pleased to offer the department The Biomarker to discuss the identification of biomarkers in patients with cancer and the prognostic/predictive impact and clinical decision-making implications of that marker. Do you have a unique case to share with our reading community? Please submit your biomarker-driven cases to us at [ Read More ]