PMO is pleased to offer the department The Biomarker to discuss the identification of biomarkers in patients with cancer and the prognostic/predictive impact and clinical decision-making implications of that marker.

Jason Gottwals is Director of Training & Technical Marketing at PathGroup.

In the third installment of The Biomarker, we will be discussing the molecular diversity of chronic lymphocytic leukemia (CLL). This month, our guest author, Jason Gottwals, returns to highlight another intriguing case. Jason is the technical director of marketing and provides leadership to the scientific training of our sales force at PathGroup.

Multiple Pathway Interrogation in CLL â€“ ATM, KRAS, and PTPN11
The ATM protein is the principal activator of the p53 pathway in response to DNA double-strand breaks.1 Loss of ATM is a frequent event in sporadic lymphoid tumors, and it is generally recognized as a tumor suppressor gene.2,3 In contrast to familial cancer syndromes, ATM gene alterations in CLL cases fail to follow the postulated pathway of tumor suppressor gene inactivation, since most cases associated with a reduced ATM expression show biallelic ATM mutations with no detectable loss of heterozygosity.4 RAS genes encode a family of 21-kDa proteins that are central nodes in signaling networks of cell fate regulation in many tissue lineages.5 Different RAS genes are preferentially mutated in distinct tumor types, with KRAS mutations highly prevalent in common epithelial malignancies.6 KRAS mutations have recently been described in a small subset of CLL and are thought to be involved in posttherapeutic subclonal evolution.7

The protein encoded by PTPN11 is a member of the protein tyrosine phosphatase (PTP) family. PTPs are known signaling molecules that regulate a variety of cellular processes, including cell growth, differentiation, mitotic cycle, and oncogenic transformation.8 PTPN11 mutations are a cause of Noonan syndrome and have been implicated in acute myeloid leukemia, juvenile myelomonocytic leukemia, and rarely in CLL, as noted in COSMIC (can cer.sanger.ac.uk). PTPN11 mutations have been known to cause activation of the RAS signaling pathway. In total, the genomic signature identified indicates an aggressive clinical course and potential utility of targeted therapeutics that are available in an investigational context.

CLL: A Molecularly Diverse Disease With New Genomic Discoveries
CLL, the most frequent leukemia in the Western world, is characterized by an extremely variable clinical course, with survivals ranging from 1 to more than 15 years.9 Currently, in addition to morphologic examination, a CLL workup in the hematopathology and molecular pathology laboratory consists of cytogenetic analysis, FISH testing, and a PCR-based test to look for somatic hypermutation of IGVH. Recent genomic studies in CLL have displayed a complex panorama of somatic mutations in various genes that have prognostic significance. In 2011, Puente and colleagues identified 46 somatic mutations in CLL, including 4 recurrent mutations in NOTCH1, XPO1, MYD88, and KLHL6 across 363 patients.10 Shortly thereafter, DomĂ©nech and colleagues performed an analysis of 301 select genes in 10 CLL patients with progressive disease and identified recurrent abnormalities in KRAS, SMARCA2, NFKBIE, and PRKD3, all of which play a role in B-cell receptor, NF-?B, and related signaling pathways.11 A review article published May 20, 2013, cites 13 genes as recurrent somatic mutations in CLL and highlights the challenge of integrating these mutations with the known prognostic variables mentioned above.12

Molecular Diversity of CLL: Implications for Precision Oncology
Integration of recurrently mutated genes into the clinical workup of CLL patients continues to evolve as new information is published. What is known to date is that the presence of a NOTCH1 mutation is associated with a shorter time to progression requiring therapy, a shorter overall survival, and is increased in patients who transform to diffuse large B-cell lymphoma.13 SF3B1 mutations have been associated with rapid disease progression and a decrease in overall survival14 and are also commonly seen in conjunction with del 11q, a known unfavorable prognostic marker.15

Importantly, Stilgenbauer and colleagues recently performed an analysis in the CLL-8 trial (NCT00281918) in which they looked at gene mutations and treatment outcome in CLL treated with fludarabine and cyclophosphamide (FC) or FC with rituximab (FCR). The presence of a NOTCH1 mutation in this analysis predicted for a lack of benefit to rituximab, and both TP53 and SF3B1 mutations were negatively correlated with progression-free survival during FCR therapy.16 Another recent discovery is the inactivating mutations of BIRC3 in fludarabine-refractory patients by Rossi and colleagues in 2012. BIRC3 is a regulator of the NF-?B pathway, and inactivation may play a role in refractoriness to purine analogs.17 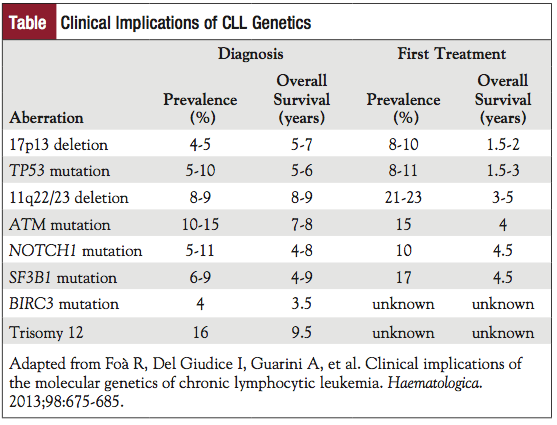 Conclusion
The pathologic evaluation of CLL is evolving to integrate results from somatic mutation testing in a number of genes to inform prognostic and therapeutic decision making. CLL is a molecularly complex disease with genomic aberrations ranging from multiple point mutations, hypermutation of genomic regions, and gross cytogenetic abnormalities that are clinically significant. All of these factors require balanced integration into treatment planning. Allogeneic stem cell transplantation is now a viable option for â€śpoor-riskâ€ť CLL patients,18 and proper prognostic stratification is essential to guide current and future chemotherapeutics. The molecular aberrations identified in this case were important to inform prognostic and therapeutic decisions and show that as knowledge of genomic complexity expands, further refinement of risk will require comprehensive molecular oncology testing and a general understanding that each patientâ€™s cancer is molecularly unique.

More than 250 abstracts that included the term â€śimmunotherapyâ€ť or â€śimmuno-oncologyâ€ť were presented during the Annual Meeting of the American Society of Clinical Oncology (ASCO) in May 2014. Presentations at this yearâ€™s ASCO meeting featured the latest findings related to immuno-oncology agents, as well as their implications for oncologists and [ Read More ]

Results from a preliminary study from a highly respected group of researchers suggest that a simple blood test for the androgen receptor splice variant-7 (AR-V7) in the AR gene can identify men with castrate-resistant prostate cancer (CRPC) who will not respond to enzalutamide. If these results are confirmed in a [ Read More ]