Prostate cancer is the most frequently diagnosed cancer in men other than skin cancer and is the second-leading cause of cancer death in men in the United States.1,2 An estimated 238,590 new cases of prostate cancer will have occurred in the United States during 2013, with an estimated 29,720 deaths.1,2 Most patients have low-risk, clinically localized disease at diagnosis and can be treated effectively (or even cured) with prostatectomy (open, laparoscopic, or robotic- assisted) and radiation therapy (external beam radiation or brachytherapy).1 However, 10% to 20% of patients are diagnosed with locally advanced or metastatic disease, and an additional 10% to 20% of patients diagnosed with localized disease will eventually develop metastases despite surgery and radiation.3,4

When prostate cancer progresses â€“ marked by elevated levels of prostate-specific antigen (PSA), new metastases, and progression of existing metastases â€“ despite confirmation of castrate levels of testosterone, it is referred to as castration-resistant prostate cancer (CRPC).5,6 A review characterizing the CRPC population revealed that 10% to 20% of patients develop CRPC within 5 years of follow-up.7 Prostate cancer deaths are typically the result of metastatic CRPC (mCRPC), and historically the median survival for men with mCRPC has been less than 2 years.8 The exact mechanism of transition from castration-sensitive prostate cancer to castration- resistant disease is not fully elucidated, but it is now understood that despite castrate levels of androgens, the androgen receptor (AR) remains active and continues to drive prostate cancer progression.9-13 In fact, in mCRPC, the AR remains hypersensitive to even low levels of androgen, increasing the stimulatory effects of testosterone and dihydrotestosterone (DHT).14-16 In addition, it has been shown that, in mCRPC, the tumor itself is an additional source of androgen.9,17

Androgen Deprivation Therapy
Since the 1940s, when Huggins and colleagues demonstrated the responsiveness of prostate cancer to androgen deprivation, ie, that lowering serum testosterone levels by surgical castration or injection of estrogens induces a major regression of advanced prostate cancer and provides rapid relief from symptoms in patients with metastatic disease,18,19 the mainstay of treatment for advanced and metastatic prostate cancer has been androgen deprivation therapy (ADT; also known as androgen suppression therapy or hormonal therapy). In ADT, castration is accomplished either surgically by bilateral orchiectomy (surgical castration), or pharmacologically by the use of gonadotropin-releasing hormone (GnRH; also known as luteinizing hormoneâ€“releasing hormone [LHRH]) agonists, GnRH (or LHRH) antagonists, or antiandrogens â€“ or their combination, which is referred to as combination (or maximal) androgen blockade (Table 1).2,3,20-25 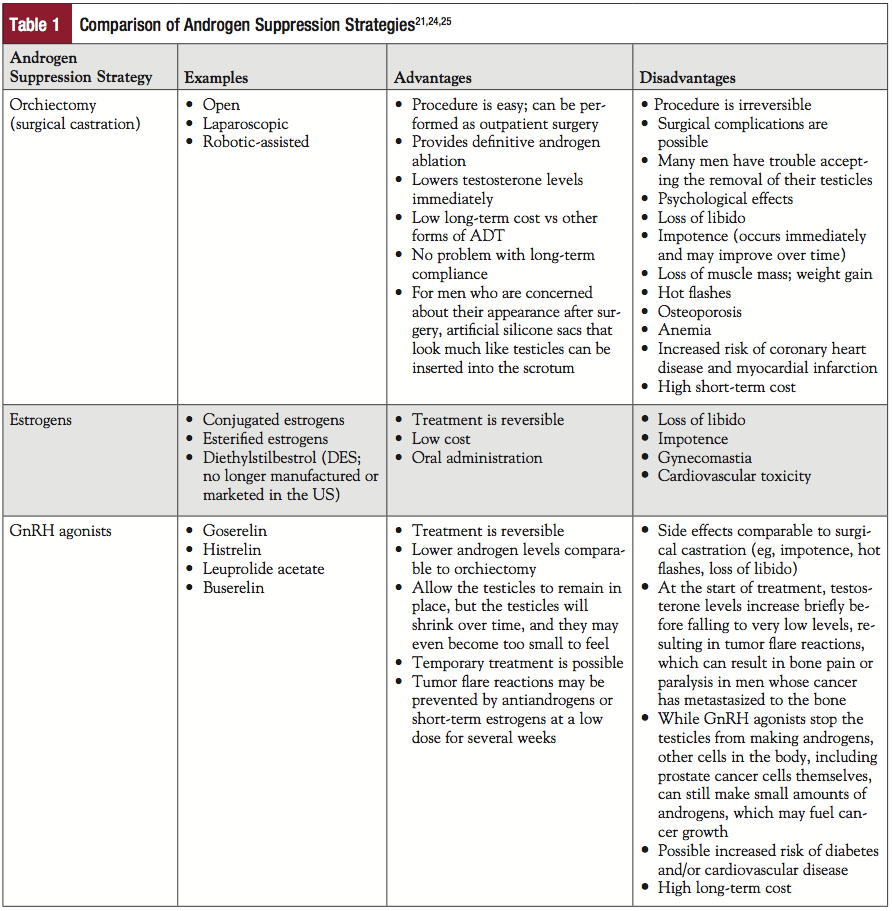 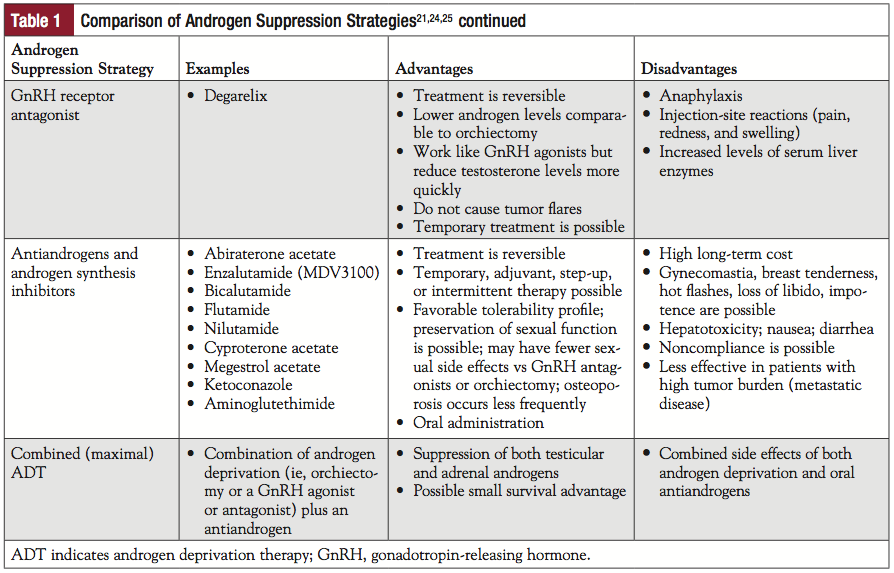 Removal of the testicular source of androgens leads to a considerable decline in testosterone levels and induces a hypogonadal status, although a very low level of testosterone (known as the â€ścastration levelâ€ť) persists.25 Surgical castration is still considered the â€śgold standardâ€ť for ADT, against which all other treatments are rated, especially in Europe.25 In the United States, practice patterns favor GnRH agonists over orchiectomy because of their reversibility, ease of administration, and acceptability to patients.26 Results from a large retrospective study showed that external beam radiation therapy with ADT confers survival equal to that of radical prostatectomy in men with high-risk prostate cancer.27

ADT consistently results in a 90% to 95% reduction in circulating levels of testosterone.4 Synthesis of androgens outside the testes contributes to disease progression in CRPC. ADTs decrease androgen production in the testes but do not affect androgen production by the adrenals or in the tumor; therefore, although the majority of patients with metastatic disease initially respond to hormonal therapy, almost all of them will eventually progress after an average of 14 to 24 months, despite maintenance of castrate serum testosterone levels <50 ng/mL.2,28-31

New Hormonal Therapy Agents
Two new hormonal therapy agents targeting the AR pathway have recently been approved by the FDA for the treatment of patients with mCRPC: abiraterone acetate and enzalutamide (MDV3100) (Table 2).32,33

Abiraterone Acetate
The FDA approval of abiraterone acetate was based on the results of 2 randomized, placebo-controlled, multicenter phase 3 studies (Study 1 and Study 2) in patients who had mCRPC who were using a GnRH agonist or had been previously treated with orchiectomy. Patients with prior ketoconazole treatment for prostate cancer and a history of adrenal gland or pituitary disorders were excluded from these trials.32 Study 1 enrolled 1195 patients with mCRPC who had received prior docetaxel chemotherapy. Results from a survival analysis conducted when 775 deaths (97% of the planned number of deaths for final analysis) were observed showed that overall survival was longer for patients treated with abiraterone acetate than for those who received placebo (Figure 1).32 Study 2 enrolled 1088 patients with mCRPC who had not received prior cytotoxic chemotherapy. At the protocol-prespecified third interim analysis for overall survival, 37% of patients (200 of 546) treated with abiraterone acetate, compared with 43% of patients (234 of 542) treated with placebo, had died. As in Study 1, overall survival was longer with abiraterone acetate than with placebo (Figure 1).32 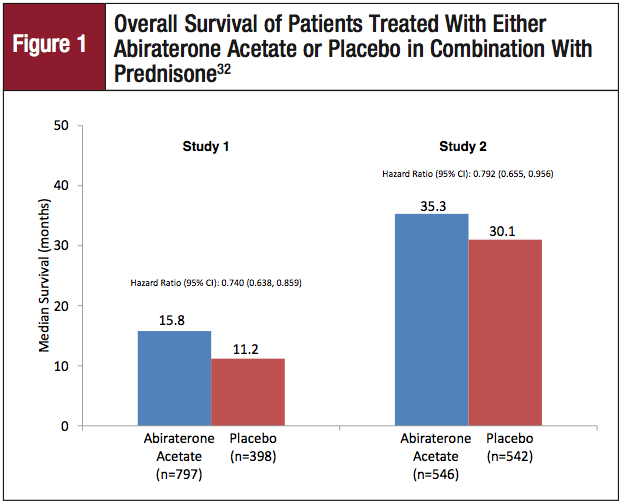 Coadministration of low-dose prednisone is necessary with abiraterone acetate to ameliorate hypertension, hypokalemia, and fluid overload resulting from mineralocorticoid excess induced by CYP17 inhibition.34 While coadministration of prednisone is manageable in patients with mCRPC, longer-term use in earlier disease phases could be problematic due to potential side effects (eg, diabetes, weight gain, Cushing syndrome, and osteoporosis).

Enzalutamide
The FDA approval of enzalutamide was based on the results of a randomized, placebo-controlled, multicenter phase 3 study (AFFIRM) in 1199 patients with mCRPC who had received prior docetaxel-based therapy.33,35 The primary end point was overall survival. The prespecified interim analysis showed a statistically significant improvement in overall survival in patients in the enzalutamide group compared with those receiving placebo (Figure 2).33,35 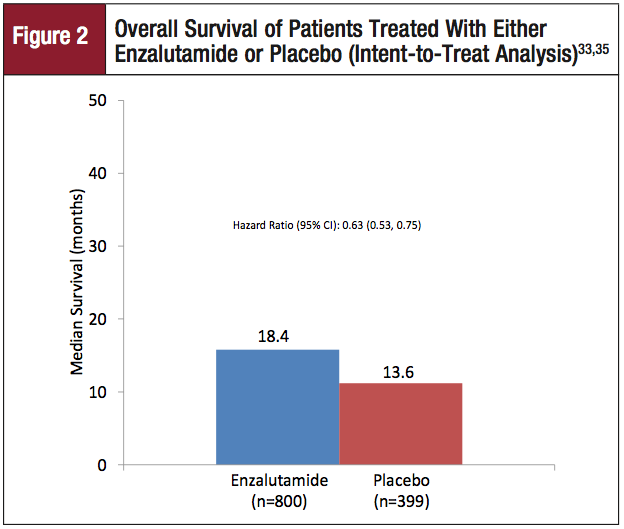 Enzalutamide has also been investigated in prechemotherapy CRPC patients, including both metastatic and nonmetastatic disease in the PREVAIL trial, a randomized, double-blind, placebo-controlled phasetrial that included 1715 patients who had progressed following treatment with an LHRH analog only, as well as patients who had progressed following treatment with both an LHRH analog and an antiandrogen. The primary end points were radiographic progression-free and overall survival. Due to positive results in both end points (30% reduction in the risk of death, hazard ratio [HR] 0.70, P<.0001; 81% reduction in the risk of radiographic progression or death, HR 0.19, P<0001), the Independent Data Monitoring Committee recommended the study be stopped and patients treated with placebo be offered enzalutamide.36

Investigational ADT Agents for CRPC
More recently, other drugs that act along the androgen signaling pathway, such as orteronel (TAK-700),37 galeterone (TOK-001),38,39 and ARN-509,40 have shown promise in clinical trials (Table 3). 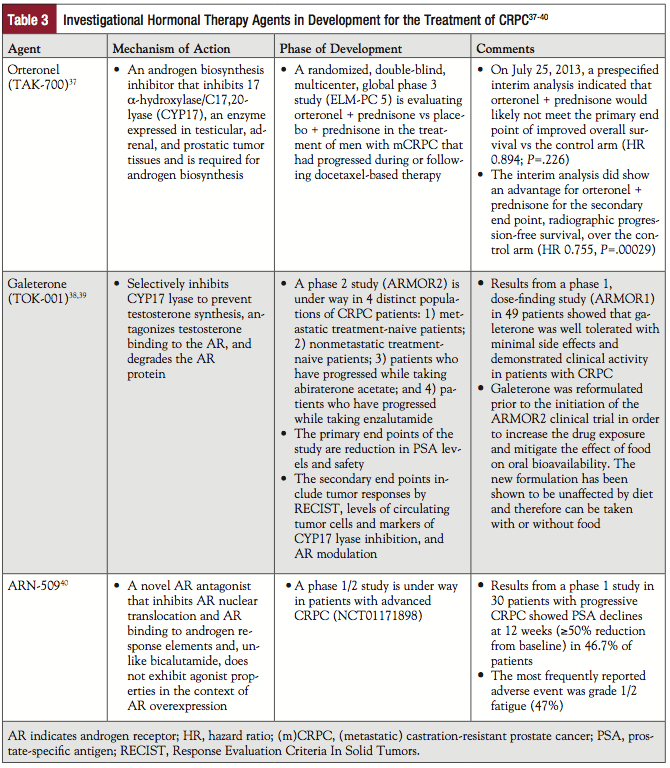 Complications Associated With Androgen Suppression
Because a diagnosis of prostate cancer does not alter the life expectancy for most men (ie, most men diagnosed with prostate cancer will die of something other than their cancer), the benefits of ADT must be weighed against ADT-related adverse effects that are a consequence of the induced sex steroid deficiency.26,41 ADT has been shown to cause weight gain, decreased lean muscle mass, and increased fat mass leading to insulin resistance and diabetes; increased cholesterol and triglycerides leading to cardiovascular disease; and loss of bone mineral density causing osteoporosis and increased fracture risk.26,41 Men commencing ADT should be counseled about and be carefully monitored for these and other ADT-induced complications, which include vasomotor flushing (hot flashes), sexual dysfunction (loss of libido, impotence), fatigue, and anemia (Table 4).26,42-47 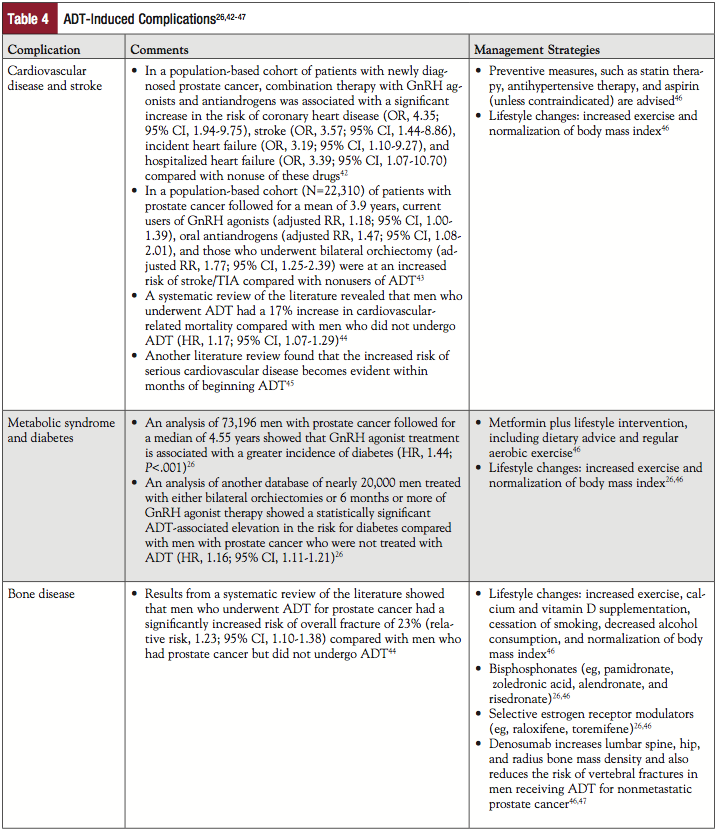 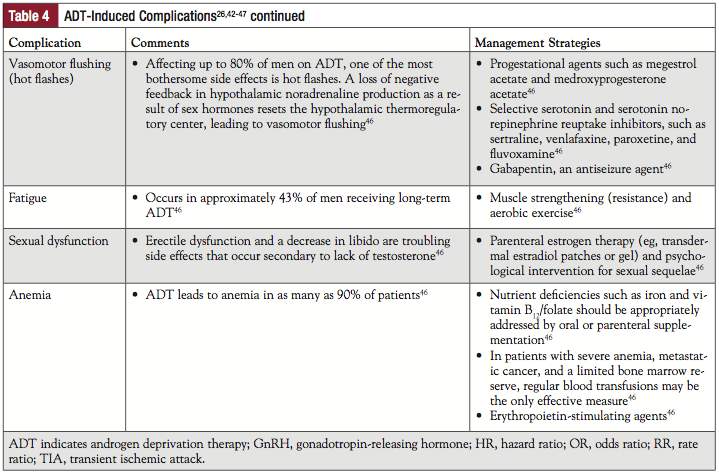 Conclusion
For more than 70 years, the benefits of androgen deprivation in the management of CRPC have been recognized. Two new hormonal therapy agents (abirÂ­aterone acetate and enzalutamide) have recently been granted FDA approval for the treatment of patients with CRPC, and additional hormonal therapy agents are under investigation in clinical trials.

However, although the majority of patients with mCRPC initially respond to hormonal therapy, almost all of them will eventually progress. In addition, ADT is associated with a number of side effects, including vasomotor flushing, sexual dysfunction, fatigue, anemia, and metabolic complications, as well as effects on cardiovascular health and bone density. Therefore, clinicians should consider comorbidities and functional status of patients before initiating ADT, and the risk-benefit ratio related to ADT must be assessed for each individual patient â€“ keeping in mind that the best way of preventing side effects is to use ADT only when it is absolutely indicated.46

Inhibition of fibroblast growth factor receptors (FGFRs) 1, 2, 3, and 4 is showing promise in the treatment of cancers driven by FGFR alterations, especially bladder cancer and lung cancer, according to phase 1 studies presented at the 2014 American Association for Cancer Research annual meeting. A phase 1 study, [ Read More ]