In November 2011, ASCO issued a prescription for transforming clinical cancer research in the United States and speeding the creation of effective new therapies for patients. In its report, Accelerating Progress Against Cancer: ASCO’s Blueprint for Transforming Clinical and Translational Cancer Research, ASCO laid out a vision for a cancer research system that fully capitalizes on scientific and technological advances to deliver more effective and personalized cancer therapies faster.

Since issuing the report, ASCO has worked with partners to drive the report’s recommendations forward. Many other major stakeholders, including the National Cancer Institute (NCI) and the US Food and Drug Administration (FDA) – have also launched initiatives that will contribute to achieving the vision of the Blueprint. Together, these steps represent significant new momentum toward a research system that realizes the potential of precision medicine.

Progress is occurring despite growing threats to cancer research funding. Accounting for recent cuts due to the federal sequester, the budget of the National Institutes of Health is at its lowest level since 2000 when adjusted for inflation – a drastic reduction in America’s historical commitment to biomedical research. Continued budget cutting in Congress could soon reduce the nation’s investment even further, risking our scientific leadership at the very moment of greatest potential for new advances. In response, ASCO has called on the nation’s leaders to sustain the search for cures and better treatments against a group of diseases that affects or touches nearly every American.

The Blueprint described a vision in which development of new therapies is driven primarily by the molecular characteristics of each patient’s cancer rather than only its location in the body. Since 2011, this vision has moved closer to reality. Recently, for example, researchers reported the discovery that endometrial cancers share many of the same molecular characteristics as hard-to-treat breast and ovarian cancers,1 creating the potential for therapies that would benefit women with a range of seemingly different diseases.

ASCO also called for therapeutic development to be driven by clearer priorities, increased collaboration, and new approaches to development of diagnostics and biomarkers. Examples of progress include:

Once completed in the coming months, ASCO intends for the recommendations to improve the prioritization of therapeutic candidates based on their potential to meet these outcomes in clinical trials, and to help shape the design of trials themselves. The current draft of the recommendations is available on ASCO.org.

The Blueprint promotes a more flexible, nimble, and efficient clinical cancer research system in which trial design and participation are driven primarily by the molecular characteristics of a patient’s cancer. Key progress in this area includes: 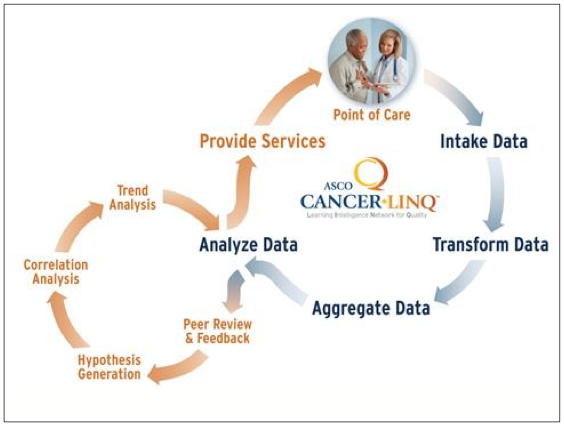 When the Blueprint was issued in 2011, the potential of health information technology (HIT) to inform cancer research and care was only beginning to be realized. While major work remains to be done, ASCO and others have made significant strides in this area:

While the primary purpose of the system is quality improvement of cancer care, there are many secondary opportunities to advance learning. For clinical and translational researchers, CancerLinQ will unlock an unprecedented wealth of anonymous data on cancer patient characteristics, treatments, and outcomes. Instead of relying solely on the 3% of patients who participate in clinical trials, researchers will learn from every patient’s experience and draw hypotheses for clinical research from the vast “real world” of cancer care. ASCO is developing strong data governance policies and protocols to assure ethical stewardship of this resource.

Looking to the future, ASCO has outlined the following as priorities for the next 1 to 2 years:

The Importance of the Multidisciplinary Team in Personalizing Care

Dear Colleague, One of the things that sets oncology care apart from the care of other illnesses is the necessity for the patient to be under the care of a multidisciplinary team. A patient with a cardiac issue may be managed just fine by a cardiologist. A patient diagnosed with [ Read More ]