The preferred screening test for HER2 status in surgical esophageal adenocarcinoma specimens is immunohistochemistry (IHC), with fluorescence in situ hybridization (FISH) restricted to cases with an indeterminate (2+) IHC score, according to investigators from the Mayo Clinic, Rochester, MN, who proposed a testing algorithm at the 2013 GI Cancers Symposium.

HER2 oncoprotein overexpression is a known driver of tumor aggressiveness in esophageal adenocarcinoma; the HER2 gene is amplified in 7% to 22% of cases. HER2-positive patients treated with trastuzumab have improved survival; therefore, it is important to test for HER2 with IHC or FISH, he said.

A previous exploratory, single-center study suggested that IHC is more predictive of trastuzumab benefit than FISH, but this superiority has not been established, and each testing method has its advantages. IHC is faster, less labor intensive, and less expensive (due to lower cost of reagents). FISH, on the other hand, is less vulnerable to tissue artifacts and offers a more objective scoring system, Yoon said.

The current study evaluated the concordance of HER2 test results between IHC and FISH assays in 673 unselected surgically resected esophageal adenocarcinomas. Each tumor was evaluated by IHC in parallel with FISH in a blinded manner using FDA-approved assays. A consensus IHC score was determined by 2 pathologists using tumor-specific criteria (negative, 0-1+; equivocal, 2+; positive, 3+). Gene amplification by FISH was defined as a HER2/CEP17 (chromosome 17) ratio ?2.

â€śIn the largest study to date comparing HER2 testing methods in esophageal adenocarcinoma, a negative IHC result nearly excludes the presence of gene amplification by FISH,â€ť Yoon said, â€śwhereas a positive result (3+) strongly predicts for the presence of amplification, and an equivocal IHC result (2+) is a weak predictor. 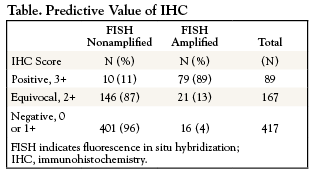 Predicting Risk of Significant Side Effects Made Possible by OnPART

OnPART can predict 6 common side effects of dose-dense doxorubicin plus cyclophosphamide and paclitaxel chemotherapy (ACT) with a high degree of accuracy in patients with breast cancer, according to a study presented at a poster session at the CTRC-AACR San Antonio Breast Cancer Symposium. The 78 breast cancer patients were [ Read More ]

Over the past decade, there has been enormous progress in our understanding of the molecular pathogenesis of nonâ€“small cell lung cancer (NSCLC), in particular among patients with lung adenocarcinoma. Approximately 60% of these patientsâ€™ tumors will be oncogene addicted.1 Those with mutated EGFR and ALK rearrangements can be treated with [ Read More ]