At the 2013 conference of the Global Biomarkers Consortium, which took place October 4-6, 2013, in Boston, Massachusetts, Rami Komrokji, MD, from the H. Lee Moffitt Cancer Center and Research Institute, Tampa, Florida, discussed the use of personalizing therapy in the management of myelodysplastic syndromes.

Myelodysplastic syndromes (MDS) are a heterogeneous group of hematopoietic disorders that have as their hallmark dysplastic cytologic morphology. MDS occur predominantly in older patients. Various risk stratification schemes have been used in MDS to define MDS subtypes; one such classification system is the International Prognostic Scoring System (IPSS). Lower-risk MDS is characterized mostly by anemia. Survival in lower-risk MDS is measured in years.

MDS is mainly a disease of splicing and genetic abnormalities, said Rami Komrokji, MD, who presented this case at the second annual Global Biomarkers Consortium conference. More than 40 recurrently mutated genes have been identif?ed in patients with MDS (Figure). Epigenetic dysregulation and mutations of the tyrosine kinase pathway and transcription factors are possible.

Most likely, every patient with MDS carries 1 or more somatic mutations responsible for disease development and progression. The diverse manner in which these driver mutations coexist can help explain the clinical variability associated with MDS. Single gene mutations likely provide prognostic significance that is independent of the IPSS and other scoring systems. Mutations in genes can often coexist, and weighing each abnormality to accurately predict prognosis is difficult. 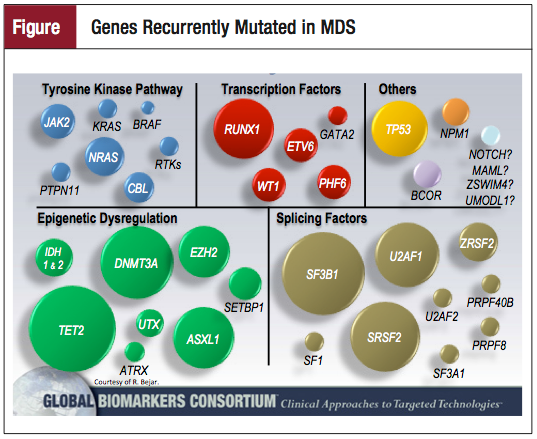 Case: Female With Macrocytic Anemia
A 58-year-old female with a history of hypothyroidism was found to have macrocytic anemia and mild thrombocytosis. Bone marrow aspirate and biopsy confirmed MDS without an increase in myeloblasts. Would you perform cytogenetic analysis on this patient?

ŌĆ£Deletion 5q is probably one of the best understood subtypes of MDS in terms of biology,ŌĆØ said Komrokji, clinical director, department of malignant hematology, H. Lee Moffitt Cancer Center and Research Institute, Tampa, Florida. ŌĆ£There is a common deleted region usually around 5q33.ŌĆØ The haploinsufficiency for RPS14 contributes to the phenotype of the disease, as it is a key determinant of ineffective erythropoiesis. The haploinsufficiency recapitulates the defect in erythroid differentiation in 5qŌĆō syndrome and activates the tumor suppressor p53 preferentially in the erythroid progenitors, leading to erythroid hypoplasia and macrocytic anemia in the del(5q) subtype of MDS.

Cytogenetics revealed a del(5q) in 20/20 cells. How would you treat this patient?

In lower-risk disease, the treatment goal is to correct or improve the cytopenia, minimize complications related to cytopenia, and prevent anemia recurrence, said Komrokji. For this purpose, erythropoietin-stimulating agents are often used to treat the anemia of lower-risk MDS, which may minimize the consequences of anemia and delay the need for red blood cell transfusions.
The patient was started on erythropoietin for 10 weeks with no response. How should treatment proceed?

The anemia of lower-risk MDS responds to lenalidomide, an immunomodulatory drug that is approved for the treatment of transfusion-dependent lower-risk patients with del(5q). Pellagatti and colleagues demonstrated that lenalidomide selectively inhibits growth of del(5q) ery-throid progenitors in vitro.1 Lenalidomide treatment reduced the need for transfusion in 76% of patients with MDS associated with del(5q), and cytogenetic improvement was observed in 73%.2 The median hemoglobin increase was 5.4 g/dL, the time to response was 4.6 weeks, and the duration of response exceeded 2 years.

What do we say at the end of this contentious year in healthcare, when government, the least of healthcareŌĆÖs 3 siblings ŌĆō clinical, business, and government ŌĆō pushed its brethren aside and demanded to lead the parade? To be certain, the ŌĆ£dynamic tensionŌĆØ between our healthcareŌĆÖs sectors historically has been [ Read More ]