The New Therapeutic Paradigm for Personalized Therapy of Melanoma

More than 80% of melanoma patients present with localized disease, 10% to 13% with regional disease, and 2% to 5% with distant metastases.2 The prognosis is excellent for patients who present with localized disease and primary tumors ?1.0 mm in thickness, with 5-year survival achieved in >90% of patients. However, survival rates range from 50% to 90% when the localized melanomas are >1.0 mm in thickness. When regional nodes are involved, survival rates are roughly halved. However, within stage III, 5-year survival rates range from 20% to 70%, depending primarily on the nodal tumor burden. Long-term survival in patients with stage IV disease is <10%.2 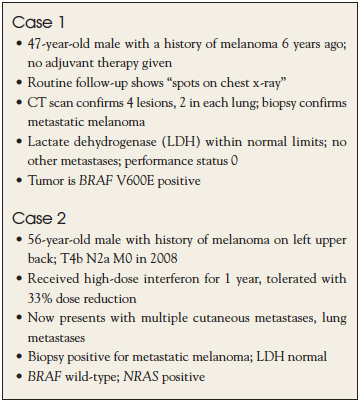 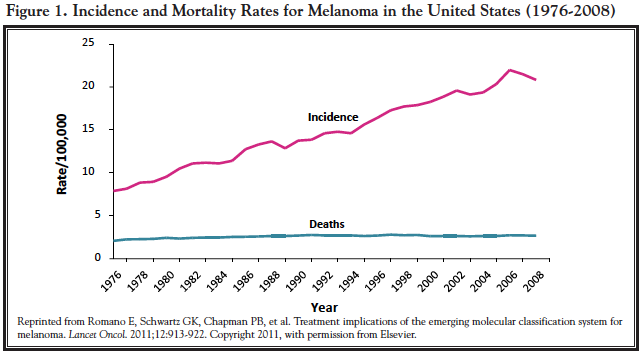 Systemic therapy is the primary treatment option for most patients with stage IV disease.2 For the past 30 years, there were no major advances in treatment for metastatic melanoma, and until recently people with the disease had few options.2 However, the therapeutic landscape for metastatic melanoma is rapidly changing with the recent development of novel agents that have demonstrated better efficacy than traditional chemotherapy2 (Figure 2). Importantly, melanomas can now be classified according to the underlying molecular aberrations that drive tumor progression, and these biomarkers are now being used in therapeutic practice.2 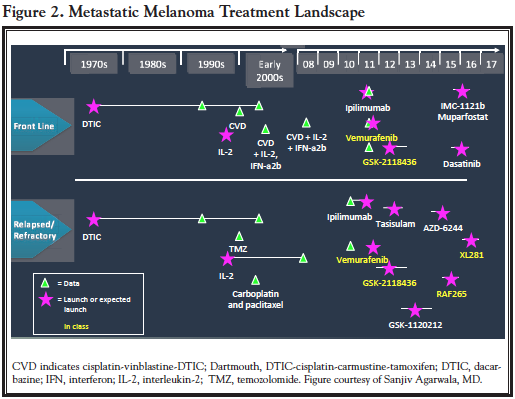 A number of combination therapies, including the Dartmouth regimen (DTIC, cisplatin, carmustine, and tamoxifen), have been used for the treatment of metastatic melanoma. However, a phase 3 study of 240 patients with stage IV melanoma compared the 4-drug Dartmouth regimen with single-agent DTIC and found no difference in survival time and only a small, statistically nonsignificant increase in tumor response for patients treated with the Dartmouth regimen (Figure 3).7 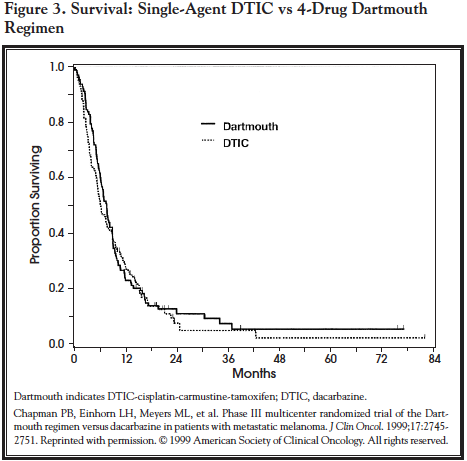 Immunotherapy
Interferon alpha-2b is the FDA-approved standard treatment for patients with metastatic melanoma, but interferon therapy is associated with significant adverse reactions in most patients. Interleukin-2 (IL-2) has been used for the treatment of melanoma with modest success for several decades, but many acute toxicities are associated with interleukin therapy, and extremely close monitoring is essential for safe administration.8-10

Ipilimumab, a monoclonal antibody that binds to CTLA-4, was approved by the FDA on March 25, 2011, making it the first drug in 13 years to be approved for the treatment of melanoma. Approval was based on a randomized phase 3 trial of 676 patients with unresectable metastatic disease that progressed during systemic therapy.11 Patients received ipilimumab 3 mg/kg plus a glycoprotein 100 peptide vaccine (gp100), ipiÂ­limumab alone, or gp100 alone in a 3:1:1 ratio. Overall survival (OS) was significantly longer in patients receiving the combination (10.0 months; hazard ratio [HR] = 0.68 compared with gp100 alone; P<.001) or ipilimumab alone (10.1 months; HR = 0.66 compared with gp100 alone; P=.003) compared with those receiving gp100 alone (6.4 months). The best objective response rates were 5.7% for ipilimumab plus gp100, 10.9% for ipilimumab alone, and 1.5% for gp100 alone. Ipilimumab stimulates T cells and is associated with a substantial risk of immune-related reactions. Grade 3 or 4 immune-related adverse events occurred in 10% to 15% of patients treated with ipilimumab and in 3% of those treated with gp100 alone. There were 14 deaths related to the study drugs (2.1%), and 7 were associated with immune-related adverse events.11

Ipilimumab is the first immunotherapy to show an OS advantage for patients with metastatic melanoma. An OS benefit was seen as a single agent compared with a vaccine and in combination with DTIC compared with DTIC alone, and the drug is effective for both frontline and second-line therapy. As yet, however, there is no confirmed biomarker to predict response to ipilimumab.

Targeted Therapy
Melanoma is not 1 disease. Evidence increasingly shows that melanoma is not 1 malignant disorder but rather a family of distinct molecular diseases.1 Exposure to the sun is generally accepted as a major causative factor of melanoma; however, the role of exposure to ultraviolet light is complex. For example, in light-skinned people, the group that is predominantly affected by melanoma, tumors are most common on areas that are intermittently exposed to the sun, such as the trunk, arms, and legs, rather than on areas that are chronically exposed to the sun, such as the face. A small proportion of melanomas arise without obvious exposure to ultraviolet light, because they affect sites that are relatively or absolutely protected, such as the palms and soles (acral melanoma), and mucosal membranes.18 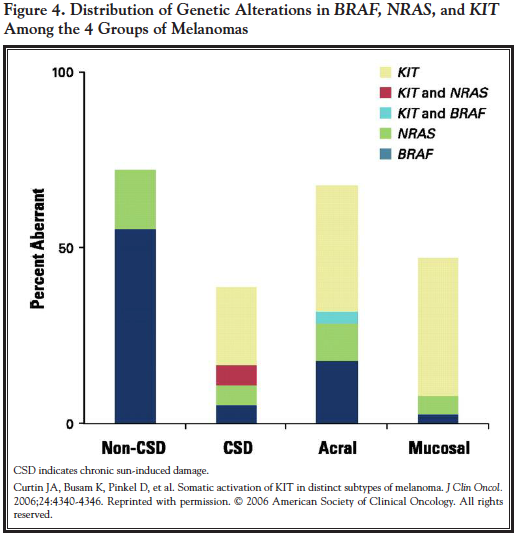 Vemurafenib, a selective inhibitor of the activated BRAF V600E gene, a gene found in 70% of malignant melanomas,19 was approved by the FDA in August 2011 for both first- and second-line treatment of unresectable or metastatic melanoma with a V600E mutation in the BRAF gene, as detected by an FDA-approved test. The cobas 4800 BRAF V600 Mutation Test, a companion diagnostic test to determine the tumor mutational status, received approval along with the agent.

The FDA approval of vemurafenib in previously untreated patients was based on an international, randomized, open-label trial in 675 subjects.20 Patients were randomized to receive either vemurafenib orally twice daily or DTIC IV on day 1 every 3 weeks. Treatment continued until disease progression, unacceptable toxicity, and/or consent withdrawal.

The FDA approval of vemurafenib in patients who received prior systemic therapy was based on a single-arm, multicenter phase 2 study in 132 patients.21 The confirmed best overall response rate was 53%; 6% with a complete response and 47% with a partial response. The median time to response was 1.4 months, with 75% of responses occurring by month 1.6 of treatment. The median duration of response was 6.5 months. Median survival was 15.9 months. Secondary skin lesions were detected in 26% of patients.

Imatinib, a tyrosine kinase inhibitor that is FDA approved as therapy for gastrointestinal stromal tumors and chronic myeloid leukemia, is under investigation as a treatment for patients with metastatic melanomas with c-KIT aberrations.22-24 In a phase 2 study of 43 patients with a median follow-up time of 12 months, the median PFS was 3.5 months, and the 6-month PFS rate was 36.6%. Ten patients (23.3%) achieved partial responses, and 13 patients (30.2%) achieved stable disease. The 1-year OS rate was 51.0%.24

The New Therapeutic Paradigm for Personalized Therapy of Melanoma
The most important first step in treating a patient with metastatic melanoma today is to test the tumor, at least for BRAF status, and then choose a therapy based on BRAF status (Figure 5). If the tumor is BRAF positive (ie, mutant), vemurafenib is probably the best choice. If it is BRAF positive, and vemurafenib therapy has failed, then ipilimumab or IL-2 can be tried. If the tumor is BRAF negative (ie, wild-type), choices include ipilimumab, IL-2, or a clinical trial. It is important to always consider clinical trials. 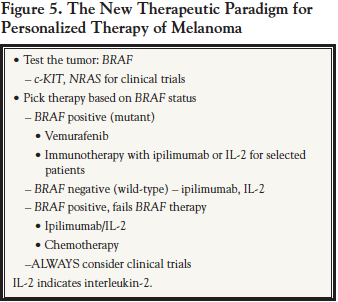 Because not every patient is a candidate for immunotherapy, and not all patients are BRAF positive, chemotherapy will still play a role in the new therapeutic paradigm, but probably as a single agent in second- or third-line therapy.

According to the National Comprehensive Cancer Network guidelines, â€śAlthough approval of ipilimumab and vemurafenib has significantly altered the initial management of patients with stage IV melanoma, each agent has unique limitations. For ipilimumab, there is the potential for serious autoimmune toxicity, clinical responses may take months to become apparent, and the overall response rate is less than 20%. However, when responses are seen, they can be quite durable. Vemurafenib, on the other hand, is associated with a 40% to 50% response rate in patients with a V600 mutated BRAF gene, and responses may be seen in days to weeks after starting the drug. Unfortunately, the median duration of response is only 5 to 6 months. The success of these 2 agents has prompted a new wave of questions regarding their use in the adjuvant setting, augmenting response by combining them with cytotoxic chemotherapy, and defining mechanisms of drug resistance. The pace of change underscores the importance of participating in a clinical trial whenever possible.â€ť2

Radiation therapy extends life in older women with early-stage breast cancer, according to 2 studies presented at the 54th Annual Meeting of ASTRO. The first study showed that the addition of radiation to lumpectomy improved overall survival (OS) as well as cause-specific survival (CSS) in women aged 70 or older. [ Read More ]