According to the American Cancer Society, colorectal cancer (CRC) is the third most common cancer in both men and women and the second leading cause of cancer death.1 An estimated 132,700 new cases of CRC and 49,700 deaths from CRC were expected to occur in 2015.1 The 5- and 10-year relative survival rates for people with CRC are 65% and 58%, respectively. When CRC is detected at a localized stage, the 5-year survival is 90%; however, only 40% of CRCs are diagnosed at this early stage. If the cancer has spread regionally to involve nearby organs or lymph nodes by the time of diagnosis, the 5-year survival drops to 71%. If the disease has metastasized to distant organs, the 5-year survival is 13%. 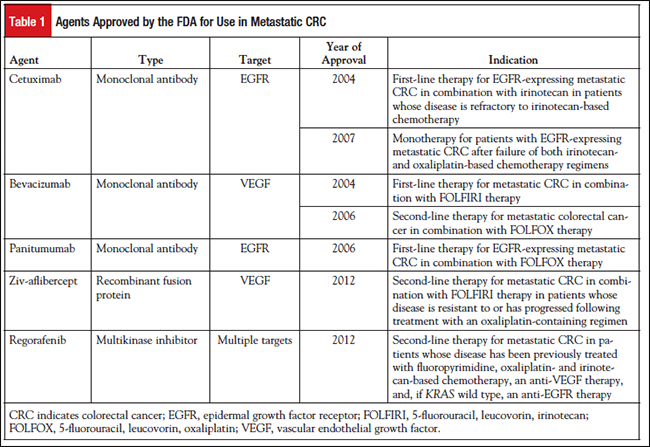 Of the many approaches currently under investigation to improve antitumor immune responses in patients with CRC, immune checkpoint inhibition (such as targeting programmed death-1 [PD-1] or one of its ligands [PD-L1]), has thus far been shown to be the most effective in a small phase 2 study.2 Two antiâ€“PD-1 agents (pembrolizumab and nivolumab) are currently approved by the FDA for the treatment of cancer (Table 2).

Microsatellite instability (MSI) is the expansion or reduction in the length of repetitive DNA sequences (known as microsatellites) in the tumor DNA compared with normal DNA.5,6 MSI results from impaired DNA mismatch repair (MMR), a process the body uses to recognize and repair genetic mismatches generated during DNA replication; a defective MMR system allows mismatch mutations to persist.5,6 MSI testing can detect an abnormal number of microsatellite repeats, which indicates that the cancer arose from cells with defective MMR genes. A result of â€śMSI-highâ€ť means that a high number of microsatellite repeats were found. A subset of about 15% of CRCs have the high-level MSI (MSI-high) phenotype, indicating a high level of DNA MMR deficiency.7 MSI-high CRCs have a better prognosis than their microsatellite stable counterparts.7

Early studies using checkpoint inhibitors largely failed in advanced CRC; one explanation for this finding is that cancers with a higher number of somatic mutations may stimulate a greater immune response and, potentially, a higher antigen burden.8,9 In 2013, a study by Droeser and colleagues demonstrated an association of PD-L1 expression with improved survival in colorectal tumor specimens.10 Le and colleagues hypothesized that tumors with a large number of somatic mutations due to MMR defects may be susceptible to immune checkpoint blockade with the antiâ€“PD-1 agent pembrolizumab.

Pembrolizumab in CRC and Other Solid Tumors With/Without DNA MMR

To test whether MSI-high tumors are more responsive to blockade of the PD-1 pathway than microsatellite stable tumors, a phase 2 study (NCT01876511) was conducted in which 41 evaluable, heavily pretreated patients with advanced CRC and other solid tumors (with and without MMR deficiency) were treated with pembrolizumab.11 Two cohorts had advanced chemotherapy-refractory CRC with either MSI-high (ie, MMR-deficient) or microsatellite stable (ie, MMR-proficient) tumors. A third cohort included patients with various cancers that tested MSI-high. 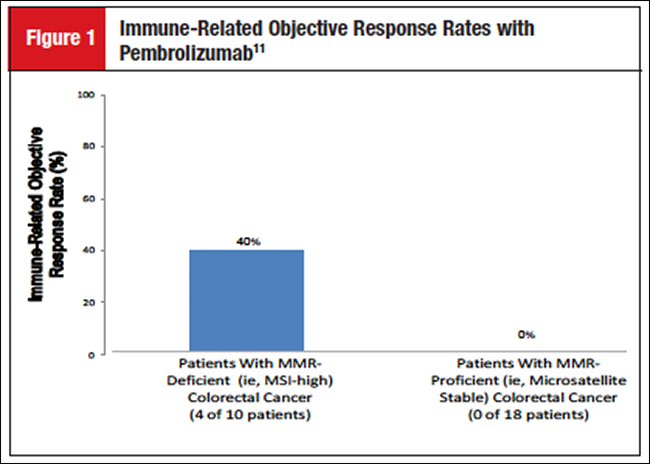 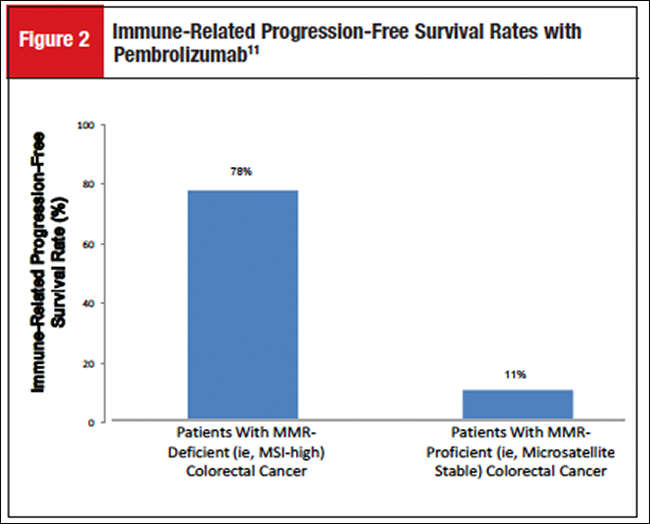 The median PFS and overall survival were not reached in the cohort with MMR-deficient CRC but were 2.2 and 5.0 months, respectively, in the cohort with MMR-proficient CRC (hazard ratio for disease progression or death, 0.10 [P <.001], and hazard ratio for death, 0.22 [P = .05]). Patients with MMR-deficient non-CRC had responses similar to those of patients with MMR-deficient CRC (immune-related ORR, 71% [5 of 7 patients]; immune-related PFS rate, 67% [4 of 6 patients]). Whole exome sequencing revealed a mean of 1782 somatic mutations per tumor in MMR-deficient tumors, compared with 73 in MMR-proficient tumors (P = .007), and high somatic mutation loads were associated with prolonged PFS (P = .02). Therefore, the results from this study showed that MMR status predicted clinical benefit of immune checkpoint blockade with pembrolizumab. Based on the encouraging results from this small, early study, a registrational phase 2 study (KEYNOTE-164) is under way to evaluate the efficacy and safety of pembrolizuÂ­mab based on MMR status in locally advanced unresectable or metastatic (stage IV) CRCs.

Nivolumab plus Ipilimumab in Advanced CRC

Studies have shown that combining checkpoint inhibitors with different mechanisms of action holds promise in advanced cancers.12 Nivolumab is under investigation in combination with ipilimumab, an antibody that targets CTLA-4, in a phase 2 study (CheckMate 142; NCT02060188) in patients with recurrent and metastatic MSI-high colon cancer.

Durvalumab is a human IgG1 monoclonal antibody that blocks PD-L1 binding to PD-1 and CD80 with high affinity and selectivity. A phase 2 study (NCT02227667) is under way in patients with advanced CRC.

Because the prognosis for patients with recurrent or metastatic CRC is extremely poor, alternative strategies such as immunotherapy are needed to improve outcomes. Although results from a small study of pembrolizumab indicate that MMR status predicts clinical benefit, additional studies with other agents may uncover other subsets of patients who would benefit from immunotherapy. As we gain understanding about the heterogeneity of colorectal tumors, patient stratification based on molecular subtypes holds promise to improve the clinical outcomes.

Secreted protein acidic and rich in cysteine (SPARC), also known as osteonectin and BM-40, is a collagen-binding matricellular protein that is involved in the regulation of a number of biological functions, including assembly of the extracellular matrix and the activity of matrix metalloproteinases and growth factors.1,2 In cancer, increased levels [ Read More ]