Colorectal cancer is one of the major cancer types with existing US Food and Drug Administration (FDA)-approved targeted therapies (Table 1).2-6 These agents are added to standard first-line chemotherapy for metastatic colon cancer, which can consist of 1 of 2 regimens: fluorouracil (Efudex), leucovorin (Wellcovorin), and oxaliplatin (Eloxatin; FOLFOX), or fluorouracil, leucovorin, and irinotecan (Camptosar; FOLFIRI). 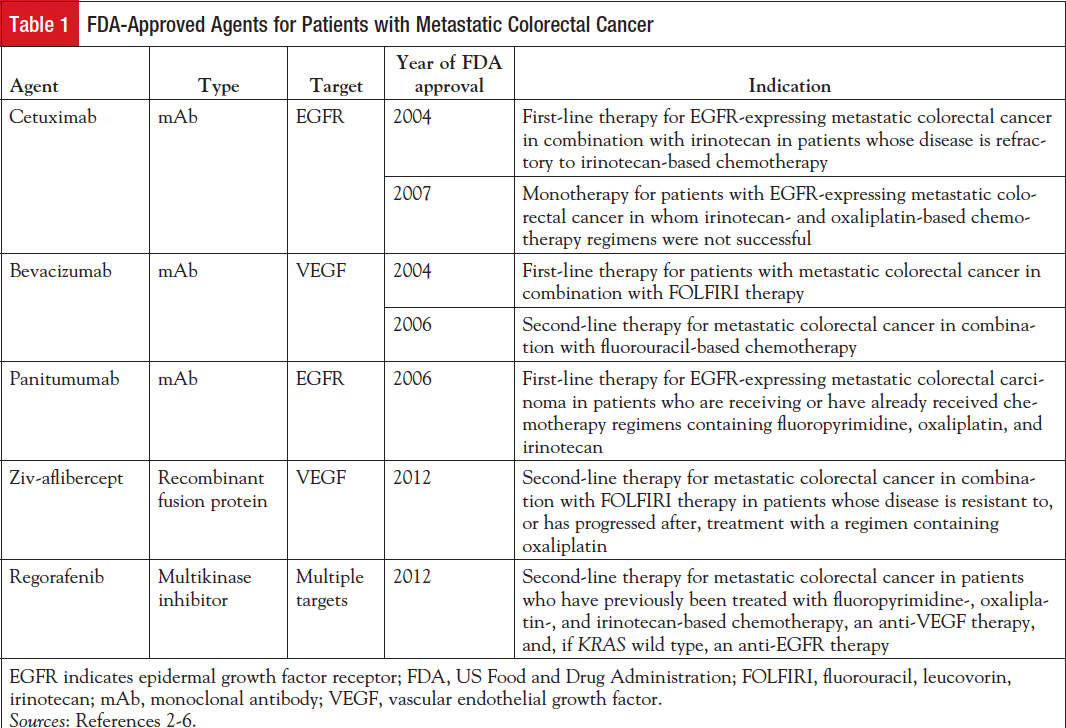 Of the many approaches currently under investigation to improve antitumor immune responses in patients with colorectal cancer, immune checkpoint inhibitionātargeting the programmed death receptor-1 (PD-1) or programmed death ligand-1 (PD-L1)āhas proven to be the most effective thus far in a small, phase 2 study.7 Two antiāPD-1 agents (pembrolizuĀ­mab [Keytruda] and nivolumab [Opdivo]) are currently FDA approved for the treatment of patients with cancer (Table 2).8,9 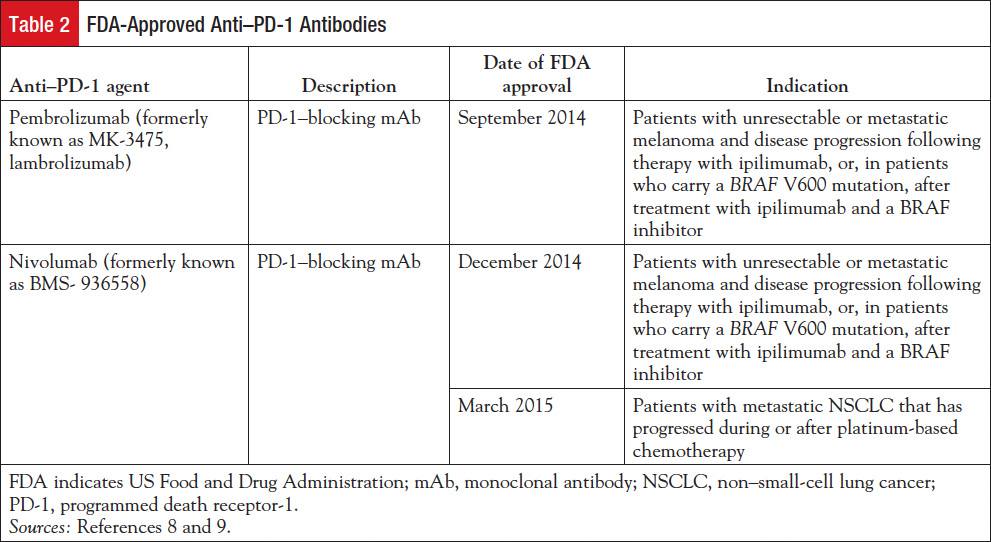 Microsatellite instability (MSI) is the expansion or reduction in the length of repetitive DNA sequences (known as microsatellites) in the tumor versus normal DNA.16,17 MSI results from impaired DNA mismatch repair (MMR), a process the human body uses to recognize and repair genetic mismatches generated during DNA replication; a defective MMR system allows mismatch mutations to persist.17 MSI testing can detect an abnormal number of microsatellite repeats, which indicates that the cancer arose from cells with defective MMR genes. A result of āMSI-highā means that a high number of microsatellite repeats were found. A subset of approximately 15% of colorectal cancers has the MSI-high phenotype and a high level of DNA MMR deficiency.18 A better prognosis has been seen in patients with MSI-high colorectal cancers compared with their microsatellite-stable counterparts.

Early studies of checkpoint inhibitors in patients with advanced colorectal cancer were inconclusive; one explanation for these findings is that cancers with a higher number of somatic mutations may stimulate a greater immune response, and, potentially, a higher antigen burden.19,20 In 2013, a study by Raoul A. Droeser, Department of Surgery, University Hospital of Basel, Switzerland, and colleagues demonstrated an association between PD-L1 expression with improved survival in MMR-proficient colorectal tumor specimens.21 Dung Thi Le, MD, Assistant Professor of Oncology, Johns Hopkins Sidney Kimmel Comprehensive Cancer Center, Baltimore, MD, and colleagues conducted a phase 2 study based on their hypothesis that tumors with a large number of somatic mutations caused by MMR defects may be vulnerable to immune checkpoint blockade with pembrolizumab.22

To test whether MSI-high tumors are more responsive to blockade of the PD-1 pathway than microsatellite-stable tumors, Le and colleagues evaluated 41 evaluable, heavily pretreated patients with advanced colorectal cancer and other solid tumors (with and without MMR deficiency) who were treated with pembrolizumab.22 Two cohorts of patients had advanced chemotherapy-refractory colorectal cancer with MSI-high (ie, MMR-deficient) or microsatellite-stable (ie, MMR-proficient) tumors. A third cohort included patients with various cancers that tested MSI-high. 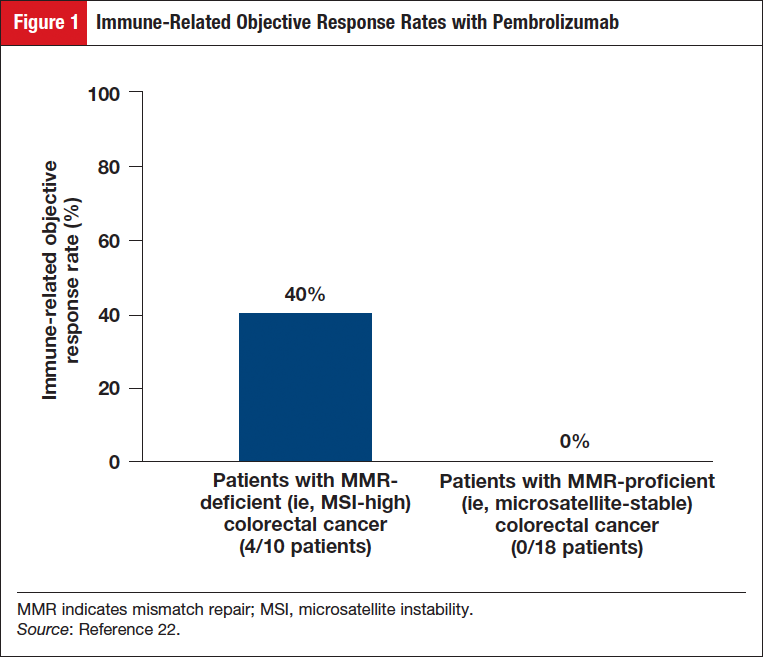 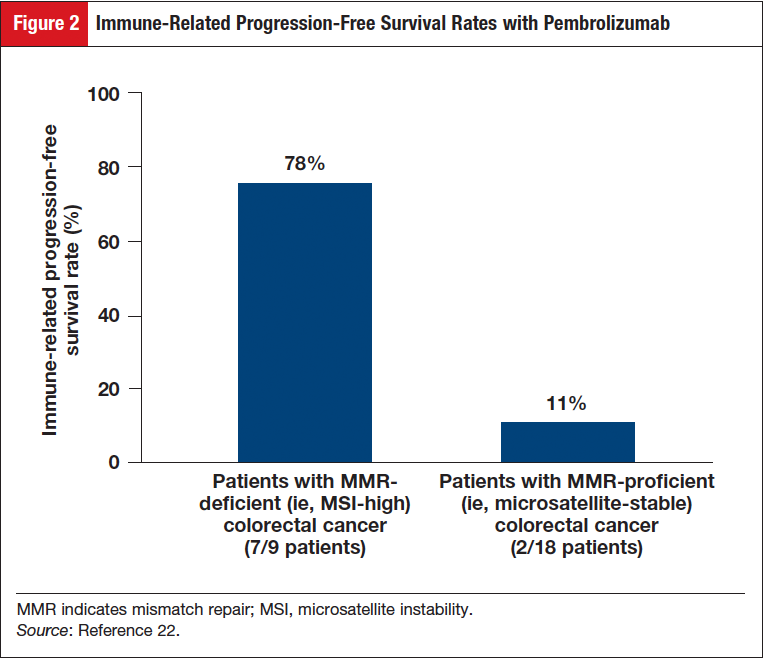 In the cohort with MMR-deficient colorectal cancer, the median PFS and overall survival were not reached, but were 2.2 months and 5.0 months, respectively, in the cohort with MMR-proficient colorectal cancer (hazard ratio for disease progression or death, 0.10 [P <.001], and hazard ratio for death, 0.22 [P = .05]). Similar responses were seen in patients with MMR-deficient noncolorectal and colorectal cancers (immune-related ORR, 71% [5/7 patients]; immune-related PFS rate, 67% [4/6 patients]). It was revealed, via whole-exome sequencing, that a mean of 1782 somatic mutations existed in MMR-deficient tumors versus 73 in MMR-proficient tumors (P = .007). High somatic mutation loads were linked to prolonged PFS (P = .02). Results of the study by Le and colleagues study showed that MMR status predicted the clinical benefit of immune checkpoint blockade with pembrolizumab.22 Based on the encouraging results of this small, early study, a phase 2 study is under way to evaluate the efficacy and safety of pembrolizumab based on MMR status in patients with locally advanced unresectable or metastatic (stage IV) colorectal cancers.11

Studies have demonstrated that combining checkpoint inhibitors with different mechanisms of action shows promise in patients with advanced cancers.23 Nivolumab is under investigation in combination with ipilimuĀ­mab, an antibody that targets CTLA-4, in a phase 1/2 study of patients with recurrent and metastatic MSI-high colon cancer.12

Durvalumab is a human monoclonal antibody that blocks PD-L1 binding to PD-1 and CD-80 with high affinity and selectivity.13,14 A phase 2 study of this drug is currently under way in patients with advanced coĀ­lorectal cancer.

Because the prognosis for patients with recurrent or metastatic colorectal cancer is very poor, alternative strategies such as immunotherapy are needed to improve outcomes for patients with advanced disease. Although results from a small study of pembrolizumab indicate that MMR status predicted clinical benefit, additional studies of other agents may uncover additional subsets of patients who may benefit from immunotherapy. As researchers gain understanding about the heterogeneity of colorectal tumors, patient stratification based on molecular subtypes holds promise to improve the clinical outcomes.

A New Year for Immunotherapy

Dear Colleague, I hope you had great holidays and a happy New Year! In this first issue of the year, we feature an in-depth review about immune checkpoint inhibition in patients with colorectal cancer. This is a continuation of our series on immunotherapy in specific disease states. In this article, [ Read More ]

Society for Immunotherapy of Cancer - February 9, 2016

Although the current standards of care cannot cure glioblastoma (GBM), an adoptive T-cell transfer may help improve outcomes in patients with GBM. At the 2015 Society for Immunotherapy of Cancer 30th Anniversary Annual Meeting, researchers reported their findings from a phase 1 clinical trial, NCT01109095. They observed patients with progressive [ Read More ]