This is the third article in a 4-part series on bendamustine. While the previous article discussed the efficacy of bendamustine for patients with chronic lymphocytic leukemia (CLL) and non-Hodgkin lymphoma (NHL) in the registration studies cited in the US product labeling, this article discusses its safety.1 The next article in this series will describe ongoing clinical investigations of the agent.

As discussed in the previous article in this series, the FDA approved bendamustine hydrochloride (Treanda), an alkylating agent administered IV, on March 20, 2008, for the treatment of patients with CLL. As the basis for its approval, the FDA used the results of a randomized, open-label, parallel-group, multicenter trial comparing bendamustine with chlorambucil as first-line treatment in 301 previously untreated patients (153 on bendamustine and 148 on chlorambucil) with advanced CLL.1,2 Chlorambucil was chosen as the comparator for this study because it was approved for first-line use in CLL in all participating countries when the pivotal trial was planned in 2001. Patients were randomly assigned to receive either bendamustine 100 mg/m2 IV on days 1 and 2 every 28 days or chlorambucil 0.8 mg/kg orally on days 1 and 15 every 28 days. Up to 6 cycles were administered to each patient.1

Table 1 lists the treatment-emergent AEs, regardless of attribution, that were reported in ?5% of patients in either treatment group in the randomized CLL clinical study.1 Worsening hypertension was reported in 4 patients treated with bendamustine and none treated with chlorambucil. Three of these 4 AEs were described as a hypertensive crisis and were managed with oral medications, and all 3 resolved. The most frequent adverse reactions leading to study withdrawal for patients receiving bendamustine were hypersensitivity (2%) and pyrexia (1%).1 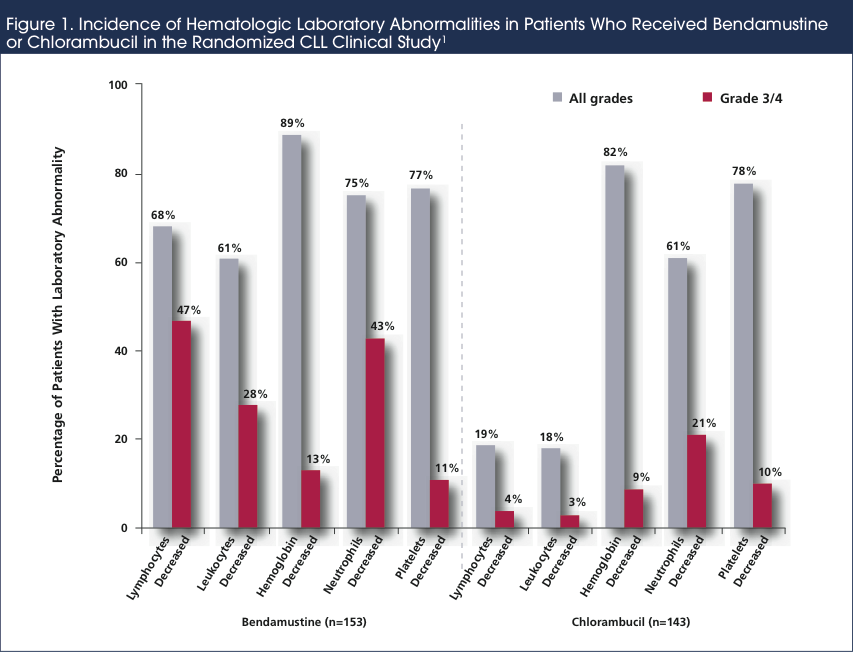 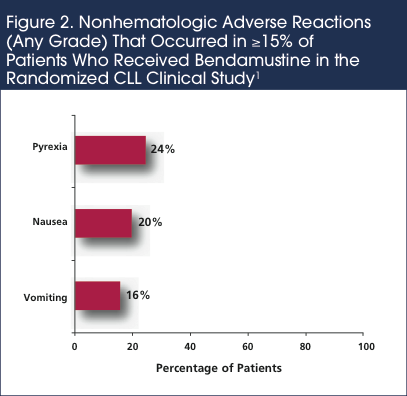 In both NHL studies, serious AEs, regardless of causality, were reported in 37% of patients receiving bendamustine. The most common serious adverse reactions occurring in ?5% of patients were febrile neutropenia and pneumonia.1 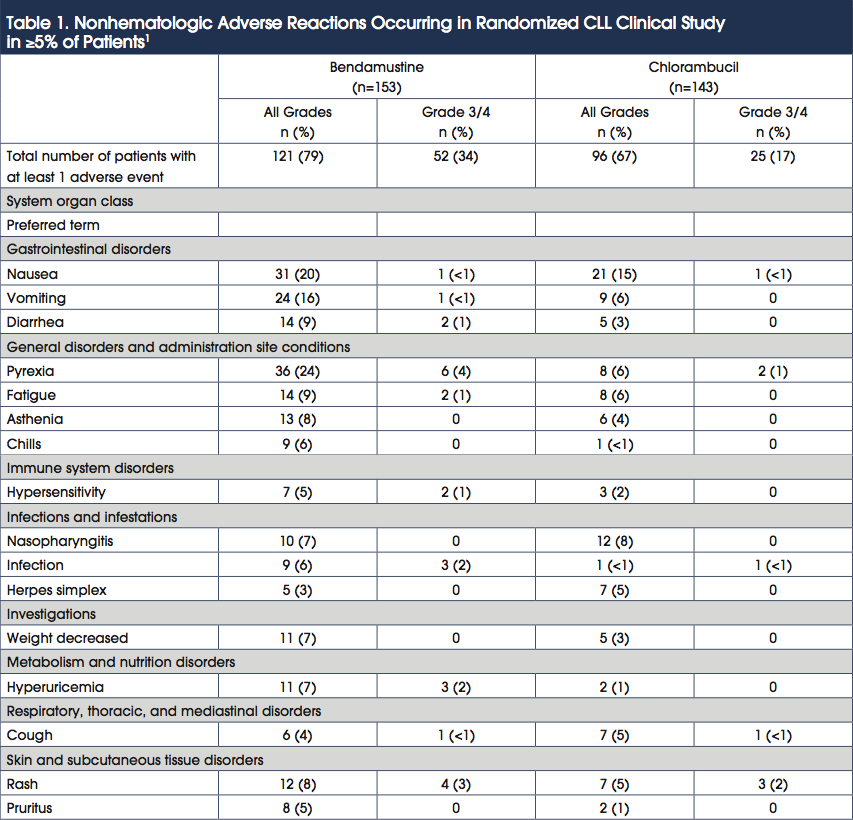 The nonhematologic AEs occurring in ?5% of the NHL patients are listed in Table 2. Grade 3/4 AEs were more common in patients aged ?65 years than <65 years (81% vs 66%, respectively) primarily because of asthenia (16% vs 9%), thrombocytopenia (25% vs 11%), cardiac disorders (11% vs 2%), and infection (24% vs 16%). Patients with previous purine analogue exposure had an increased risk of grade 3/4 neutropenia (41% vs 29%), grade 3/4 infections (26% vs 14%), and herpes zoster reactivation (13% vs 8%). The latter did not occur in patients on prophylactic antivirals, while it occurred in 11% of those not receiving prophylactic therapy. Opportunistic infections were relatively uncommon with bendamustine, with 10% of patients having herpes zoster, 9% candidiasis, 4% herpes simplex, 3% cytomegalovirus, 1% Pneumocystis jiroveci, and 1% Mycobacterium.6

Clinically important chemistry laboratory values that were new or worsened from baseline and occurred in >1% of patients at grade 3 or 4 in NHL patients treated in both single-arm studies combined were hyperglycemia (3%), elevated creatinine (2%), hyponatremia (2%), and hypocalcemia (2%).1

In the clinical trials, leukocyte, platelet, hemoglobin, and neutrophil counts were monitored every week initially, and the lowest cell counts typically occurred during the third week after treatment.7 Myelosuppression was generally reversible.7 Management strategies for myelosuppression include the administration of colony-stimulating factors and blood product replacement and bendamustine dosage reduction.7 Grade 3 or 4 neutropenia led to filgrastim or pegfilgrastim therapy in 38% of patients in the larger indolent NHL study.4 In the CLL study, granulocyte colony-stimulating factors (used at the discretion of the investigator) were administered during 3% (23 of 783 cycles) of bendamustine and 0.3% (2 of 733) of chlorambucil cycles, with erythroÂ­poietin administered during 0.5% and 0.3% of cycles.2 According to the pooled analysis of the rituximab-refractory indolent NHL data, blood products or growth factors were used in 33% of cycles (297 of 901 cycles), with 51% of patients receiving growth factor support.6 In addition, a higher incidence of grade 3/4 neutropenia (41% vs 29%) was observed in patients with previous purine analogue exposure than in those without this exposure.6

Hematologic nadirs may require dose delays if recovery to the recommended values has not occurred by the first day of the next scheduled cycle. Before administration of the next cycle of treatment, the absolute neutrophil count should be ?1000 cells/mL and the platelet count should be ?75,000 cells/mL.1 Up-front dosage reductions in the first cycle should be considered for patients who have been heavily pretreated, have a poor performance status, or both. Similarly, this approach may be reasonable to further limit myelosuppression in patients demonstrating a good response.7

Infections
The US product label for bendamustine points out that infections, including pneumonia and sepsis, have been reported in adult and pediatric patients in clinical trials and in postmarketing reports, and that infection has been associated with hospitalization, septic shock, and death.1 Patients with myelosuppression following treatment with bendamustine are more susceptible to infections.1 Patients receiving bendamustine, especially those with myelosuppression, should be counseled about the potential risk of infection and instructed to immediately report any signs or symptoms of infection.1

Infusion Reactions and Anaphylaxis
Infusion reactions to bendamustine have occurred commonly in clinical trials. Symptoms include fever, chills, pruritus, and rash. In rare instances, severe anaphylactic and anaphylactoid reactions have occurred, particularly in the second and subsequent cycles of therapy.1 The US product label for bendamustine points out that patients receiving bendamustine should be monitored clinically and the drug should be discontinued for severe (grade 3/4) reactions. Patients should be asked about symptoms suggestive of infusion reactions after their first cycle of therapy. In clinical trials, patients who experienced grade ?3 allergic-type reactions were not typically rechallenged. Measures to prevent severe reactions, including premedicating with antihistamines and corticosteroids, should be considered in subsequent cycles for patients who have previously experienced grade 1 or 2 infusion reactions, although discontinuation of bendamustine may be necessary in more severe cases.1,5

Tumor Lysis Syndrome and Skin Reactions
Tumor lysis syndrome (TLS) is a metabolic disorder that develops as lysed tumor cells release their intracellular contents into the circulation. It is characterized by hyperkalemia, hyperuricemia, and hyperphosphatemia and may lead to acute renal failure, cardiac arrhythmias, or death.1,8 TLS associated with bendamustine treatment has been reported in patients in clinical trials and in postmarketing reports. The onset tends to be within the first treatment cycle of bendamustine and, without intervention, may lead to acute renal failure and death.1 TLS occurred in 2 patients with previously untreated CLL who had received their first cycle of bendamustine; these events were not fatal and both patients continued with treatment.2 In the larger indolent NHL study, 2 patients with disease refractory to rituximab (who had previously been treated with a median of 2 [range, 0-6] chemotherapy regimens) developed TLS (1 grade 3 and 1 grade 4); both episodes resolved with appropriate supportive care, and both patients continued with therapy.4

Patients taking bendamustine should be carefully monitored for tumor burden, renal function, and blood chemistry levels (particularly potassium and uric acid levels).1,7 In high-risk patients (ie, those with large tumor burden [elevated lactate dehydrogenase concentration or circulating tumor cells of >25,000/mm3], tumors with a high proliferation rate, or tumors with increased sensitivity to cytotoxic therapy), administration of IV or oral fluids is recommended to maintain a high fluid volume.7 In some cases, allopurinol is administered during the beginning of bendamustine therapy to minimize uric acid production.7 However, there may be an increased risk of severe skin toxicity (including Stevens-Johnson syndrome [SJS], and toxic epidermal necrolysis [TEN]) when bendamustine and allopurinol are administered concomitantly.1,7 Another agent, rasburicase, has been suggested as an alternative to allopurinol for the prevention of TLS in patients undergoing treatment with bendamustine for CLL.7 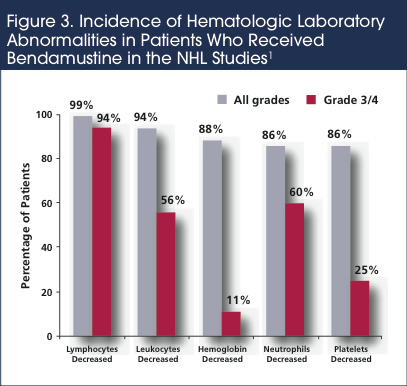 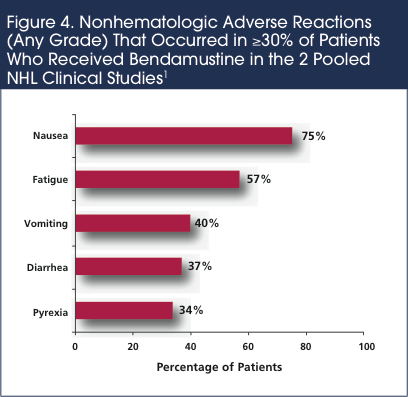 The safety of bendamustine in CLL and in indolent B-cell NHL that has progressed during or within 6 months of treatment with rituximab or a rituximab-containing regimen has been demonstrated in patients who participated in an actively controlled trial for the treatment of CLL and 2 single-arm studies for the treatment of indolent B-cell NHL. In these studies, the most frequently reported AE was myelosuppression. The most common nonhematologic AEs seen with bendamustine in CLL were pyrexia, nausea, and vomiting, while in NHL, the most commonly reported AEs were nausea, fatigue, vomiting, diarrhea, and pyrexia. Serious drug-related AEs reported in bendamustine clinical trials included myelosuppression, infections (such as pneumonia), infusion reactions, and TLS. Cases of SJS/TEN, some fatal, have been reported when bendamustine was administered concomitantly with allopurinol and other medications known to cause these syndromes. Patients should be monitored closely for these reactions after bendamustine treatment for early intervention. 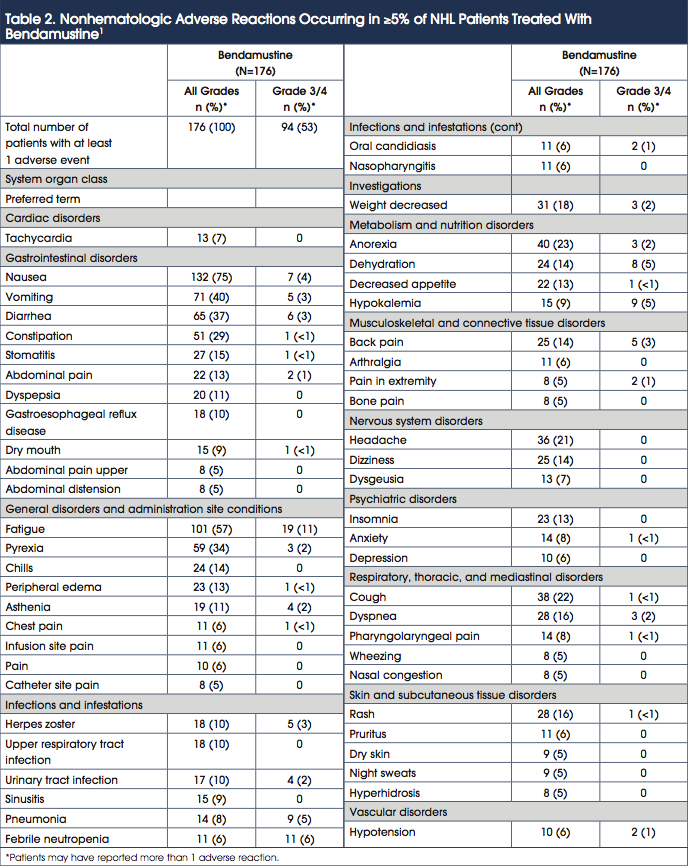 Part 4 in the Series
The next article in this series will describe ongoing clinical investigations of bendamustine.

Safety of Bendamustine in Treatment of CLL and NHL

The previous articles have outlined the clinical outcomes of clinical trials evaluating bendamustine in chronic lymphocytic leukemia (CLL) and non-HodgÂ­kin lymphoma (NHL). The third in the series of articles discusses the short-term toxicities of bendamustine from these clinical trials. Patients with CLL are always a challenge to treat due to [ Read More ]