This is the second article in a 4-part series on bendamustine. This article discusses the efficacy of bendamustine for patients with chronic lymphocytic leukemia (CLL) and non-Hodgkin lymphoma (NHL) in the registration studies cited in the US product labeling.1 Subsequent articles in this series will discuss the safety of bendamustine and describe ongoing clinical investigations of the agent.

CLL, the most common form of leukemia in Europe and North America, is a disorder in which morphologically mature but immunologically less mature lymphocytes accumulate in the blood, bone marrow, and lymphatic tissues.2 According to the American Cancer Society, an estimated 15,680 new cases of CLL will occur in 2013 (9720 in men and 5960 in women), and 4580 people will die of the disease.3

The American Cancer Society estimates that the 5-year relative survival rate for patients with CLL is 82%.3 However, the clinical course of patients with CLL is heterogeneous, with some patients experiencing rapid disease progression and others living for decades without requiring treatment. The clinical staging systems developed by Rai et al4 and Binet et al5 are used to classify patient stage and predict survival (Table 1).

For many years, alkylating agents, especially chlorambucil, were considered the drugs of choice for first-line treatment of CLL.9 More recently, first-line treatment is frequently conducted with chlorambucil, fludarabine, or fludarabine plus cyclophosphamide, either alone or in combination with riÂ­tuximab.10 Studies have shown significantly higher response rates, longer duration of remission, and longer progression-free survival (PFS) rates in patients treated initially with fludarabine than in those treated with chlorambucil.11,12 However, the median survival times did not differ among the patients treated with fludarabine and chlorambucil.

On March 20, 2008, the FDA approved bendamustine hydrochloride (Treanda), an alkylating agent administered IV, for the treatment of patients with CLL. As the basis for its approval, the FDA used the results of a randomized, open-label, parallel-group, multicenter trial comparing bendamustine with chlorambucil as first-line treatment for previously untreated patients with advanced CLL.1,10 Because of this, the US product label points out that efficacy relative to first-line therapies other than chlorambucil has not been established.1 Chlorambucil was chosen as the comparator for this study because it was approved for first-line use in CLL in all participating countries when the pivotal trial was planned in 2001.

The trial was conducted in 301 patients (153 on bendamustine and 148 on chlorambucil) with Binet stage B or C (Rai stages I-IV) CLL requiring treatment.1

Patients were randomly assigned to receive either bendamustine 100 mg/m2 IV on days 1 and 2 every 28 days or chlorambucil 0.8 mg/kg (Brocaâ€™s normal weight) orally on days 1 and 15 every 28 days (Figure 1).1 Up to 6 cycles were administered to each patient.

The patient populations in the bendamustine and chlorambucil treatment groups were balanced with regard to baseline characteristics, as shown in Table 2. Ninety percent of patients in both treatment groups had immunophenotypic confirmation of CLL (CD5, CD23, and either CD19, CD20, or both).1 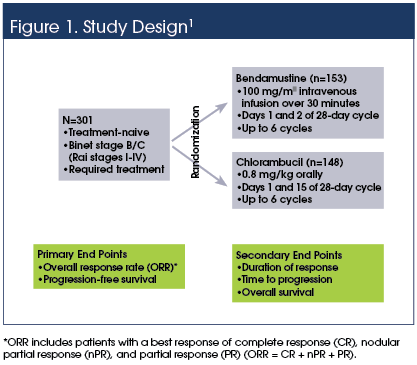 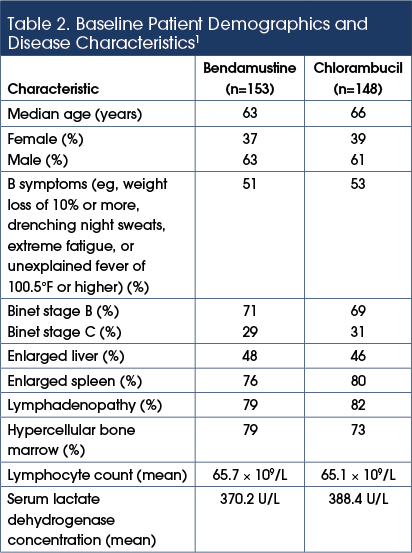 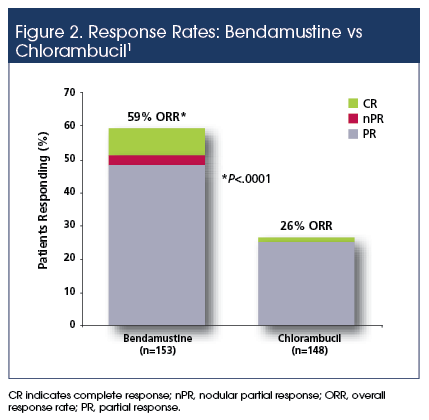 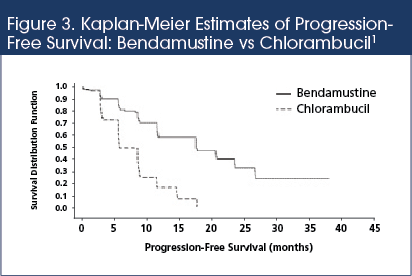 Treatment of indolent NHL depends on the histology and stage of the disease. The stages of NHL are listed in Table 3.14 Because indolent NHL is often asymptomatic in early stages, it is generally advanced (stage III or IV) at the time of detection.

Over the past decade, the addition of rituximab, an anti-CD20 monoclonal antibody, to conventional chemotherapy has revolutionized the treatment of B-cell malignancies. Studies have established rituximab as a viable treatment option in patients with relapsed or refractory indolent NHL,17 and treatment guidelines from the National Comprehensive Cancer Network now recommend a rituximab-based regimen as initial therapy for patients with B-cell lymphoma.18 However, patients tend to become refractory to rituximab over time. In addition, patients with indolent B-cell lymphoma who are treated with rituximab-chemotherapy combinations often develop rituximab resistance, so innovative treatments were sought for this rituximab-refractory patient population.19 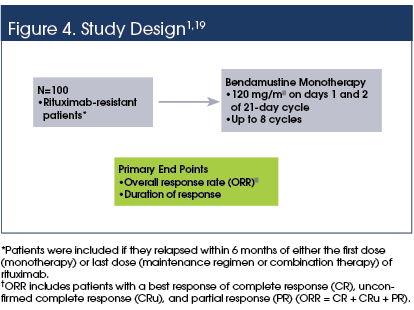 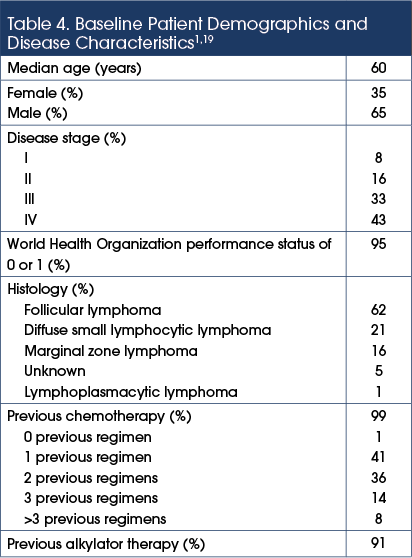 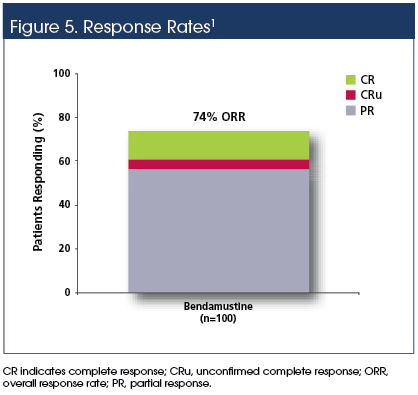 Seventy-six percent of patients had advanced-stage disease at enrollment, and the median number of prior chemotherapy regimens was 2 (range, 0-6 regimens).19 The baseline patient demographics and disease characteristics are shown in Table 4.1,19 Ninety-seven percent of patients had relapsed within 6 months of either the first dose (monotherapy) or last dose (maintenance regimen or combination therapy) of rituximab.1

Efficacy was assessed by a blinded independent review committee using the modified International Working Group response criteria (IWG-RC) for NHL.20 Modifications to the IWG-RC specified that a persistently positive bone marrow in patients who met all other criteria for CR would be scored as PR. Bone marrow sample lengths were not required to be ?20 mm. The end points were defined as follows:

In addition, single-agent bendamustine provided durable responses that lasted a median of 9.2 months.1

Part 3 in the Series

The next article in this series will discuss the safety data in patients with CLL and NHL reported in the registration studies cited in the bendamustine US product labeling.

In 2013, an estimated 15,680 people in the United States will be diagnosed with chronic lymphocytic leukemia (CLL), and 4580 will die of the disease. The mean age at diagnosis is 72 years, and the 5-year survival rate is 82%.1 Patients with indolent disease are able to go long periods [ Read More ]