History and Characterization of Bendamustine

Bendamustine is a bifunctional chemotherapeutic agent with both alkylating and antimetabolite (purine analog) properties, which are discussed in more detail below.1,2 BenÂ­damustine is known by the trade names Treanda in the United States, where it was initially approved in 2008; RiÂ­bomustin in some countries in the European Union (eg, Germany and Switzerland); and Levact in other countries in the European Union, including Austria, Belgium, Denmark, Finland, France, Ireland, Italy, Luxembourg, Norway, Poland, Spain, and the United Kingdom, where it was approved in 2010.2-5

RiboÂ­mustin (bendamustine hydrochloride) was approved for frontline treatment of indolent NHL as part of combination therapy; for advanced MM (Durie-Salmon stage II with progression or stage III) in combination with prednisone; and for CLL.6

The use of bendamustine in the United States for indications other than as described above for Treanda is considered to be off-label. Bendamustine is approved in the United States as monotherapy. It is approved in the EuroÂ­pean Union, as noted, in combination with prednisone for MM.2,5 BendaÂ­mustine has also been used in combination with other agents (Table 17-11).

Ongoing clinical investigations of bendamustine as monotherapy or in combination therapy in patients with hematologic malignancies or with solid tumors will be discussed in the fourth article in this series.

History of Bendamustine
The observation that nitrogen mustard induced tumor responses resulted in research on the use of alkylating agents to treat cancer.12 The alkylating agent bendamustine was first synthesized in 1963 in Jena, in the former German Democratic Republic (East Germany), at the Institute for Microbiology and Experimental Therapy.12 The first use of bendamustine was in 1969 to treat MM.13 Bendamustine was used primarily in East Germany in patients with CLL, NHL, Hodgkin disease, MM, and lung cancer. BendaÂ­mustine was not studied systematically in clinical trials in patients until the 1990s, after German reunification.9,12 The development of bendamustine in the United States began in the early 2000s.1

Characterization of Bendamustine
Structure and Mechanism of Action
Bendamustine hydrochloride is a bifunctional mechlorÂ­ethamine derivative with the chemical name 1H-benzimidazole-2-butanoic acid, 5-[bis(2-chloroethyl)amino]-1-methyl-, monohydrochloride, with an empirical molecular formula of C16H21Cl2N3O2 â€˘ HCl and a molecular weight of 394.7. BendaÂ­mustine hydrochloride contains a mechlorethamine group and a benzimidazole heterocyclic ring with a butyric acid substituent.3 The structural formula of bendamustine is illustrated in Figure 1.

The alkylating activity of bendamustine resides in its mechlorethamine or nitrogen mustard moiety, which resembles the alkylating agents cyclophosphamide and chlorambucil. This is illustrated in Figure 2.

Bendamustine has a benzimidazole ring, unlike chlorambucil, which has a benzene ring. The benzimidazole ring resembles some purine analogs; it was included to add antimetabolite effects. Although this structure may add purine analog activity to the molecule, this has not been demonstrated.3 The exact mechanism of action of bendamustine is not known. It is active against both dividing and quiescent cells.3 The alkylÂ­ating activity of bendamustine resembles that of other alkylating agents in that it causes interstrand and intrastrand DNA crosslinks.3,12 The DNA damage, including DNA double-strand breaks caused by bendamustine, are repaired more slowly than those caused by other alkylating agents. Bendamustine, unlike other alkylating agents, appears to have a unique mechanism of activation of DNA damage stress responses and apoptosis (programmed cell death), and inhibition of mitotic checkpoints. For example, bendamustine causes an increase in the proportion of cells in the S phase of the cell cycle and downregulates genes involved in cell division.12

Bendamustine activates a base-excision DNA repair pathway, but unlike other alkylating agents it does not induce an alkyltransferase mechanism of DNA repair. This may result in less susceptibility to drug resistance. The regulation of apoptosis associated with bendamustine is also unlike that associated with other alkylating agents and appears to be stronger and more rapid.12 Bendamustine also appears to induce cell death by mitotic catastrophe, a necrotic mechanism, which is distinct from apoptosis. Therefore, even in malignant cells that are missing a functional apoptotic pathway, bendamustine has cytotoxic activity. Other nonapoptoÂ­tic mechanisms associated with bendamustine-induced cytotoxicity include depletion of adenosine triphosphate, which may make cells more susceptible to metabolic shutdown, and induction of reactive oxygen species stress pathways, which may also affect metabolic equilibrium.14 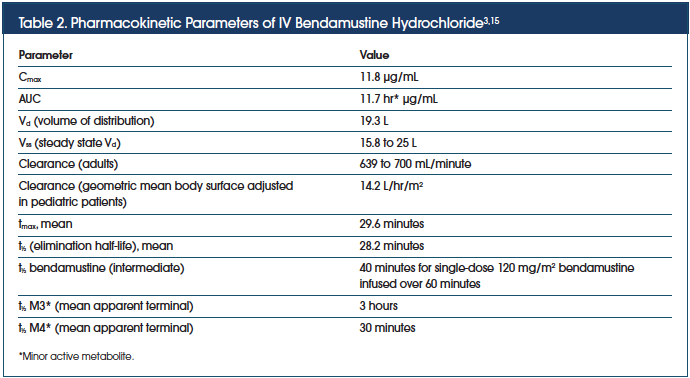 Absorption
The Cmax of bendamustine hydrochloride occurs at the end of infusion of a single IV dose (dose unspecified).3

Bendamustine has been studied in a single phase 1/2 trial in pediatric patients aged 1 to 19 years with acute lymphocytic leukemia (n=27) or acute myeloid leukemia (n=16). The exposures as measured by AUC (area under the concentration time curve from 0 to 24 hours) and Cmax were similar to those measured in adults at the same dose (120 mg/m2 IV administered over 60 minutes). Note that the efficacy of bendamustine has not been established in pediatric patients.3

Race
The effect of race on safety and/or efficacy of bendamustine has not been determined. Although a small number (n=6) of Japanese subjects had an average exposure that was 40% higher than that of non-Japanese subjects (number not specified) receiving the same dose, the significance of this difference is not known.3

Adverse Events
In adult patients with NHL, there was a correlation between nausea and the Cmax of bendamustine.3

Part 2 in the Series
The next article in this series will present the efficacy data for the registration studies of bendamustine in patients with CLL and NHL.

Bendamustine has an interesting history that spans more than 50 years. Bendamustine was first synthesized in the early 1960s in the former East Germany. It was first used to treat multiple myeloma and was subsequently extended to patients with chronic lymphocytic leukemia (CLL), non-Hodgkin lymphoma (NHL), and Hodgkin lymphoma. UnfortunateÂ­ly, [ Read More ]

Chronic lymphocytic leukemia (CLL) is the most common form of leukemia in adults and is a slowly progressing cancer of the blood and bone marrow. According to cancer statistics, an estimated 16,060 new CLL diagnoses will be made in the United States in 2012.1 Careful surveillance predicts the time point [ Read More ]