Proteins in the B-cell lymphoma-2 (BCL-2) family are key regulators of apoptosis, and the BCL-2 gene is frequently overexpressed in leukemias and lymphomas.1,2 The BH3-only proteins of the BCL-2 family (ie, those having only the BCL-2 homology domain BH3) can trigger apoptosis by binding to the prosurvival members of this family and neutralizing their functional activity (ie, sequestration of the proapoptotic Bcl-2 family members).3

One approach to anticancer treatment has been the development of BH3 mimetic agents, small molecules capable of mimicking BH3-only proteins and thus inhibiting prosurvival proteins and inducing apoptosis in cancer cells.2,3 The first-generation BH3 mimetic navitoclax bound not only to BCL-2 but also to BCL-XL (the physiologic function of which is to protect platelets from apoptosis as they age), and has shown clinical efficacy in some BCL-2â€“dependent hematologic cancers.2,3 However, thrombocytopenia (a deficiency of platelets in the blood), caused by inhibition of BCL-XL, was observed as a dose-limiting side effect with navitoclax.2,3

Venetoclax, a second-generation BH3 mimetic, is a synthetic derivative of navitoclax that was designed to protect platelets by selectively binding to BCL-2 with high affinity but not to BCL-X.2,3 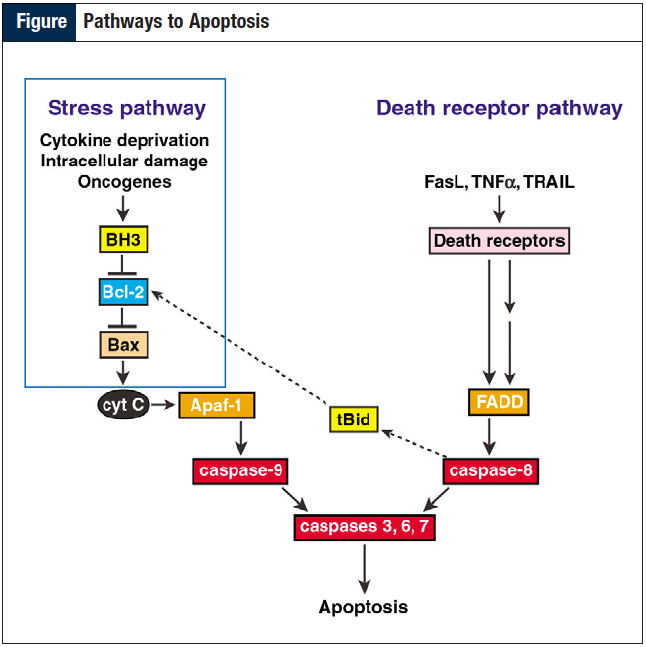 In B-cell malignancies, such as chronic lymphocytic leukemia (CLL) and indolent non-Hodgkin lymphoma, the malignant B cells rely on a number of internal and external stimuli to survive, such as the activation of the B-cell receptor, cytokine and chemokine signaling, or direct cell-to-cell interactions. Attracted by chemoÂ­kines, including CXCL12 and [ Read More ]