PMO is pleased to offer the department “The Biomarker” to discuss the identification of biomarkers in patients with cancer and the prognostic/predictive impact and clinical decision-making implications of that marker.

Welcome to The Biomarker column! As you know, the field of oncology and pathology is dramatically changing from a diagnostic and treatment paradigm that was based largely on microscopic characteristics to one that integrates genomic alterations, also known as biomarkers, to drive clinical management decisions. In each issue of PMO, we will be discussing the clinical implications of biomarkers in molecular pathology and oncology practice and will cover a broad range of established and emerging biomarkers.

Briefly about myself, I am a molecular oncologic pathologist with board certifications in anatomic pathology, clinical pathology, hematopathology, and molecular pathology. As part of my clinical duties, I evaluate tumor samples for the presence of genomic aberrations (or biomarkers) and condense this information down to clinically actionable decision points that summarize the diagnostic, prognostic, and therapeutic utility of the changes. I recently signed out a case of a metastatic melanoma that harbored a DNA point mutation in a very druggable gene. This alteration was not a BRAF V600E but rather a KIT V559G point mutation in exon 11.

KIT in Molecular Oncologic Pathology Practice
The KIT gene is located on the long arm of chromosome 4 and encodes for a transmembrane receptor tyrosine kinase protein (also known as CD117), which is expressed by interstitial cells of Cajal, hematopoietic precursors, mast cells, as well as melanocytes. Alterations in KIT have been observed in a number of malignancies and lead to constitutive activation and/or dysregulation of downstream molecular pathways including PIK3, JAK/STAT, and MAPK.1 Genomic aberrations in KIT have diagnostic, prognostic, and therapeutic value across a wide spectrum of malignancies, and these changes can be assessed by a variety of technologies. The presence of a certain type of KIT mutation (D816V), traditionally assessed by polymerase chain reaction–based methods, is a major required diagnostic criteria for systemic mastocytosis.2 The overexpression of the KIT protein by immunohistochemistry is critical to help pathologists arrive at a diagnosis of gastrointestinal stromal tumor.3 Certain mutations in KIT predict for response to small molecular inhibitor therapy such as imatinib, and KIT genotyping is now recommended in National Comprehensive Cancer Network guidelines.4 In certain acute myeloid leukemias with translocations involving core binding factor proteins, the presence of a KIT mutation predicts for an aggressive clinical course.5,6 Because of its protean utility, KIT evaluation is becoming incorporated into larger, multiplex molecular panels performed utilizing modern techniques, such as next-generation sequencing (NGS).

Melanoma: A Heterogeneous Disease on a Molecular Level
We most commonly equate metastatic melanomas as harboring a BRAF V600E mutation because of widespread literature delineating its utility and prominent implications for FDA-approved targeted therapy.7 However, it is important to know that melanoma is a very heterogeneous disease on a molecular biologic level. There is a growing list of actionable genomic aberrations in melanomas that have diagnostic, prognostic, and therapeutic relevance.8 It is also intriguing that cutaneous melanomas have a different molecular biology compared with uveal melanomas, the latter being observed to more frequently harbor alterations in GNAQ and GNA11 genes.9 In fact, a metastatic melanoma with a GNAQ or GNA11 mutation should prompt a thorough evaluation to rule out a uveal primary. In addition, preclinical models have shown potential benefit with MEK inhibitors in melanoma cell lines harboring GNAQ mutations.10 NRAS mutations can also be seen in 15% to 20% of melanomas, most commonly in neoplasms arising in the background of sun-damaged skin.11 These mutations are known to render melanomas unresponsive to BRAF inhibitors, and early data suggest that MEK inhibitors either alone or as combination therapy may yield success.12 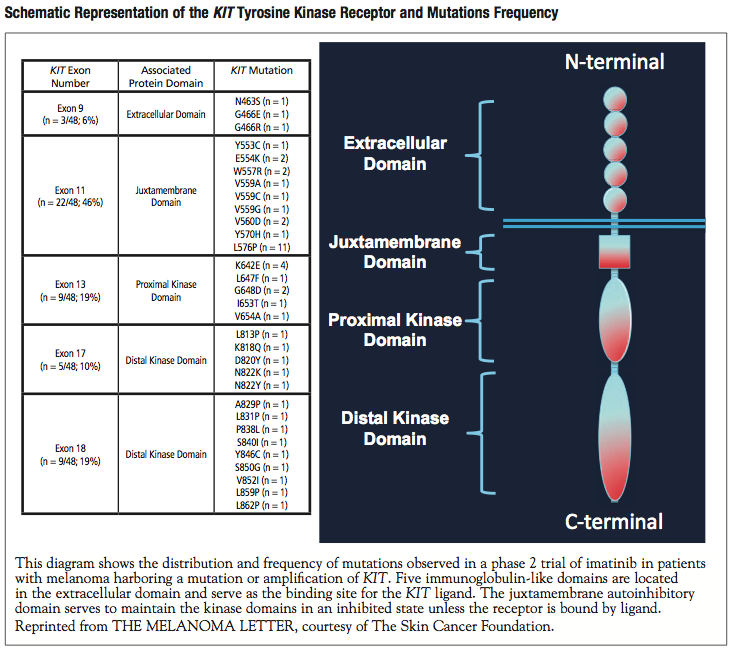 KIT in Melanoma: Implications for Precision Oncology
KIT mutations were first reported in 2005 and are present in a small subpopulation of melanoma patients. Mutations in KIT are generally mutually exclusive with other driver mutations, including NRAS, BRAF, and GNAQ. Typically, KIT mutations are found in melanomas that arise in 10% to 20% of acral, mucosal, and sun-damaged sites.13 This particular mutation was located on exon 11 in the juxtamembrane domain and is known to render the tumor responsive to targeted therapy. Currently, there is no FDA-approved therapy available for melanoma with KIT mutations, but there are a number of published case studies as well as phase 2 clinical trials that have shown complete or partial tumor response to therapies such as imatinib in melanomas harboring mutations in exon 11 of KIT.14-19

Reports have also demonstrated efficacy with other targeted therapies such as dasatinib used singly or in combination.16,20 In addition, there are clinical trials enrolling patients with metastatic melanoma with KIT mutations (available at www.clinicaltrials.gov). Alternatively, consideration may be given to off-label use of targeted therapy with appropriate patient education and consent; however, this latter approach may be fraught with reimbursement challenges in the near term. While we have seen great success with targeted therapy in melanoma, it is important to temper our excitement as the vast majority of patients treated with these agents go on to develop resistance. Mechanisms for resistance are being elucidated on a molecular biologic level and include acquired mutations in the NRAS gene as well as KIT amplification.19 Over time, it will become standard of care to comprehensively assess for the presence of alterations in genes such as BRAF, GNAQ, NRAS, KIT, and PDGFR-alpha21 at once to both predict for response to therapy and to monitor for potential resistance.

Conclusion
Melanomas are heterogeneous on a molecular level and can frequently harbor genomic aberrations that may predict for response to targeted therapy. Mutations in the KIT gene are most commonly seen in a subset of melanomas and predict for response to therapies that are FDA approved for other cancers. Clinical management decisions in melanoma patients with such druggable aberrations, such as KIT mutations, should be grounded on implementing strategies that involve use of targeted therapy. Further work, however, is needed to better refine our ability to predict for therapeutic response and elucidate mechanisms of treatment resistance. In this regard, comprehensive molecular tumor profiling with technologies such as NGS in advanced melanomas holds the promise to empower oncologists and other treating clinicians with information to make scientifically driven therapeutic management decisions. This will in turn decrease costs and improve outcomes in patients afflicted with this aggressive disease.