There are 4 isoforms of phosphatidylinositol 3-kinase (PI3K) with distinct functions and expression patterns; among those 4 isoforms, PI3K-alpha and PI3K-beta are ubiquitously expressed and involved in a range of cellular functions.1

Both PI3K-gamma and PI3K-delta are expressed predominantly in normal and malignant hematopoietic cells within the bone marrow.1

PI3K-delta plays an essential, nonredundant role in B-cell signaling.2,3 It is a key driver of proliferation through clonal expansion and supports normal and malignant B-cell survival. In certain B-cell malignancies, over time, malignant cells crowd out healthy blood components.1 PI3K-delta signaling within malignant B cells facilitates their interaction with stromal cells and the nurturing microenvironment of the lymph nodes and bone marrow.4 These interactions promote migration of malignant B cells from the periphery to the lymph nodes and bone marrow, a process known as chemotaxis. Hyperactive chemotaxis, dysregulated apoptosis, and hyperactive adhesion lead to accumulation of malignant B cells within lymphoid tissues, which can contribute to lymph node enlargement.

Idelalisib is an inhibitor of phosphatidylinositol 3-kinase (PI3K-delta), which is expressed in normal and malignant B cells.5 Idelalisib inhibits PI3K-delta and blocks multiple signaling pathways, including B-cell receptor signaling and signaling from the CXCR4 and CXCR5 receptors, which are involved in trafficking and homing of B cells to the lymph nodes and bone marrow.5,6 Idelalisib inhibits malignant B-cell proliferation and inhibits signaling with the microenvironment, disrupting chemotaxis and adhesion, and mobilizing malignant B cells from lymphoid tissues into the peripheral blood.5,7 Blocking PI3K-delta with idelalisib induces apoptosis and reduces malignant B-cell viability.5,7

Through mobilizing malignant B cells to the periphery, idelalisib may reduce lymph node burden.7

Idelalisib is approved for 3 indications5:

Accelerated approval was granted for FL and SLL based on overall response rate. Improvement in patient survival or disease-related symptoms has not been established.5 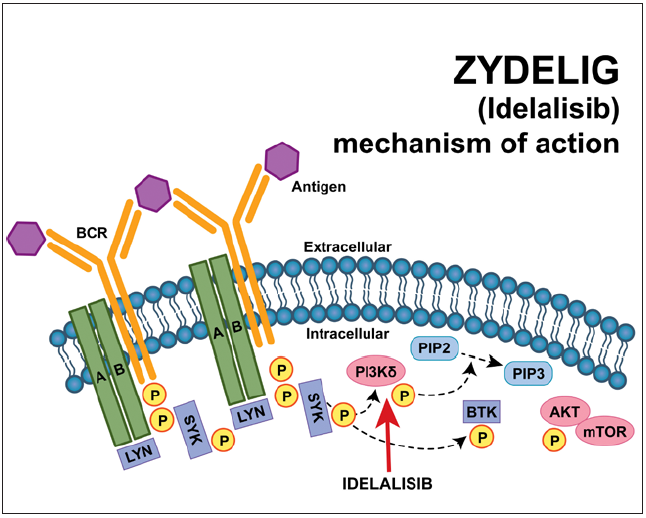 Chemotherapy Can Be Spared in Many Patients with Early Breast Cancer: Devil Is In the Details

One of the most important studÂ­Â­Â­ies presented at ASCO 2018 showed that endocrine therapy alone was noninferior to endocrine therapy plus chemotherapy in women with estrogen receptor (ER)-positive, HER2-Â­negative, node-negative early-stage breast cancer and an intermediate risk score (score, 11-25) on the Oncotype DX gene-expression assay for breast cancer. “Application [ Read More ]