Family With a Risk of Cancer Tries to Change Its Destiny

To shield any future children from the fear she harbors of getting breast cancer, Katie Dowdy underwent a controversial procedure to select embryos of hers that were free of a genetic mutation linked to the disease.

Deciding to have the procedure, called preimplantation genetic diagnosis, or PGD, wasnâ€™t easy, says Ms. Dowdy. Her husband initially â€śworried about playing God,â€ť she says. â€śI thought, if I could have a healthy baby who doesnâ€™t have to worry about the same thing I did, why wouldnâ€™t I?â€ť says the 34-year-old, who hasnâ€™t had cancer. The couple, who live in Castle Pines, Colo., now have two young girls, both born using PGD.

Preimplantation genetic diagnosis has long been available during IVF, or in vitro fertilization, to eliminate the risk of passing on severe disorders such as spinal muscular atrophy and cystic fibrosis. Now, fertility clinics say they are seeing a small but increasing number of women choosing PGD to avoid giving birth to children who carry mutations in the BRCA genes, which increase the risk for breast and other cancers.

â€śItâ€™s on the rise because more people are becoming aware that thereâ€™s a genetic component to breast cancer,â€ť says Mark Hughes, founder of Genesis Genetics, in Plymouth, Mich., which offers reproductive-genetics-diagnosis services to fertility clinics nationwide.

Critics fear genetically vetting embryos can be used to create so-called designer babies. Embryos with the gene mutation may be discarded, which some critics also oppose. Gender selection is one form of embryo-testing that stirs ethical questions. Some clinics will agree to select for a specific sex only for health reasons â€“ to avoid a disease such as hemophilia, for example, which typically is passed only to boys. Opponents of PGD for breast cancer also say that having a BRCA-gene mutation doesnâ€™t mean a person will necessarily get the disease and that there are options for detecting and treating the cancer.

A parent with a mutation on the BRCA1 or BRCA2 genes has a 50-50 chance of transmitting it to the next generation. Between 45% and 65% of women with the mutations are expected to be diagnosed with breast cancer by age 70, according to the National Cancer Institute. That compares with about 12% of women in the general population.

BRCA mutations, which also increase the risk for ovarian, prostate and other cancers in men and women, are relatively rare, accounting for 5% to 10% of all breast cancers. Some women undergo prophylactic mastectomy to reduce their chances of getting the disease.

After her aunt, who shares the same mutation, had a prophylactic mastectomy, Ms. Dowdy researched her options and learned about PGD. Ms. Dowdy says she and her husband had struggled to conceive. Figuring they would need fertility assistance, also doing PGD to avoid passing on the BRCA mutation seemed like an obvious precaution. 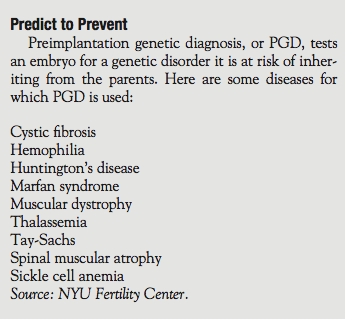 The PGD process begins with standard IVF. After two weeks of hormonal stimulation, eggs are retrieved, fertilized and left to multiply for five days. Then a laboratory scrutinizes several cells, looking for gene mutations. The analysis isnâ€™t believed to harm the embryo. Embryos without BRCA mutations are earmarked for transfer into a womanâ€™s uterus.

Two of Ms. Dowdyâ€™s seven embryos were BRCA-mutation free. Both were transferred to her uterus. One implanted and grew to become a daughter, Reagan, born in 2010. Ms. Dowdy and her husband opted for PGD again to conceive another child, Mackenzie, born in March 2013.

Only recently have some doctors started discussing PGD with women who have a breast-cancer mutation. More often, BRCA-positive women learn about the procedure on their own. â€śWe write about it in our newsletter and weâ€™ve done webinars on it, but not everyone knows about it,â€ť says Sue Friedman, executive director of Force, a nonprofit patient-support group focused on hereditary breast and ovarian cancers.

For women who have no trouble conceiving, the choice to do PGD involves the added hassle of fertility treatment. PGD can add about $6,000 to the price of IVF, which runs at least $10,000, depending on the clinic, plus thousands of dollars more for medications.

â€śItâ€™s by no means 100% [of eligible women] who are choosing to do it,â€ť says William Schoolcraft, medical director of the Colorado Center for Reproductive Medicine in Lone Tree, Colo., and Ms. Dowdyâ€™s doctor. Dr. Schoolcraft says he has done about 10 PGD procedures to eliminate a BRCA mutation in the past three years. He has heard some patients say â€śMy grandma had it, my aunt had it, my mom had it. I want to stop this train.â€ť Others have the attitude that if my baby turns out like me, so be it.

Even after an embryo selected through PGD is successfully implanted, some doctors recommend an amniocentesis or another prenatal test called CVS to make sure there isnâ€™t a BRCA-gene mutation.

â€śYou have to think of it from the perspective of a woman whose life has been turned upside down by breast cancer and the guilt associated with choosing to have a baby that could have those same problems,â€ť says James Grifo, director of the Division of Reproductive Endocrinology and Infertility at NYU Fertility Center.

Recap of FDA Drug Approvals in 2019

According to the FDAâ€™s â€śCenter for Drug Evaluation and Research (CDER) Annual Report: New Drug Therapy Approvals 2019,â€ť the agency approved 48 novel drugs in 2019. Although this number does not approach the record of 59 approvals in 2018, it far surpasses the mere 22 approvals that occurred in 2016.

One question on oncologistsâ€™ minds recently is whether treatment with immune checkpoint inhibitors in patients with cancer has a negative effect on COVID-19 disease. So far, the data have not shown a deleterious effect, but the definitive answer is unknown. In fact, some experts think immune checkpoint inhibitors may have a positive effect on the virus.