Acute myeloid leukemia (AML) can be divided functionally into as many as 8 categories that are molecularly defined. AML with an FLT3 internal tandem duplication (FLT3 ITD) mutation is an aggressive hematologic malignancy with a poor prognosis. It represents approximately 25% of patients with newly diagnosed AML, said Mark J. Levis, MD, PhD.

ITD mutations typically result from the insertion of a duplicated sequence of a portion of the juxtamembrane region of the FLT3 wild-type gene. Polymerase chain reaction (PCR)-based molecular diagnostic DNA testing using inward-facing primers that flank the juxtamembrane domain of FLT3 is the standard technique to detect FLT3 ITD mutations. 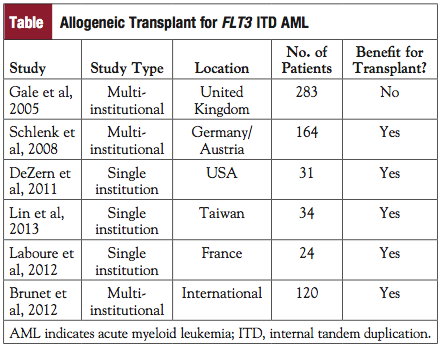 She was treated with cytarabine/daunorubicin (7 + 3) as induction therapy. Her counts recovered, but with 10% blasts in the marrow. High-dose cytarabine was administered as salvage therapy, and a complete remission was achieved. There was no FLT3 mutation detectable in complete remission 1.

The patient was consolidated with allogeneic transplant. The FLT3 ITD mutation was undetectable by conventional assay.

Detecting the FLT3 ITD mutation with the standard PCR assay has a limit of detection of approximately 1 in 100 cells. Many patients with FLT3 ITD AML ultimately relapse with FLT3-mutated disease after transplant, but the FLT3 mutation is still not detectable by standard PCR assay because the burden of disease is lower than the detection threshold of the assay.

â€śAn investigational PCR technique, called tandem duplication PCR (TD-PCR), can detect the presence of an FLT3 ITD mutation with a high level of sensitivity and specificity,â€ť said Levis. TD-PCR uses outward-facing, overlapping primers within the expected region of mutation to improve the limit of detection of leukemia cells in a background of wild-type cells. The limit of detection of the TD-PCR assay approaches a single mutant molecule.

TD-PCR assay posttransplant showed minimal residual disease. The patient was enrolled on a protocol for an FLT3 inhibitor (sorafenib) as maintenance therapy because of her high risk of relapse.

Sorafenib has shown high activity in FLT3 ITDâ€“positive relapsed AML. The patient was maintained on sorafenib therapy for 12 months, during which time the FLT3 mutation remained detectable.

Unfortunately, the woman developed gastrointestinal intolerance to sorafenib, and it was discontinued. She relapsed within 30 days of discontinuing sorafenib. Her AML molecular profile at relapse was FLT3 ITD positive (90 base pairs ITD, 0.8 allelic ratio).

Examination of drug pharmacokinetics shows a 20-fold variation in sorafenib levels between patients, said Levis. â€śIn retrospect, she was probably overdosed at 400 mg,â€ť he said. â€śWe may have been able to
lower the dose and maintain the target inhibition.â€ť 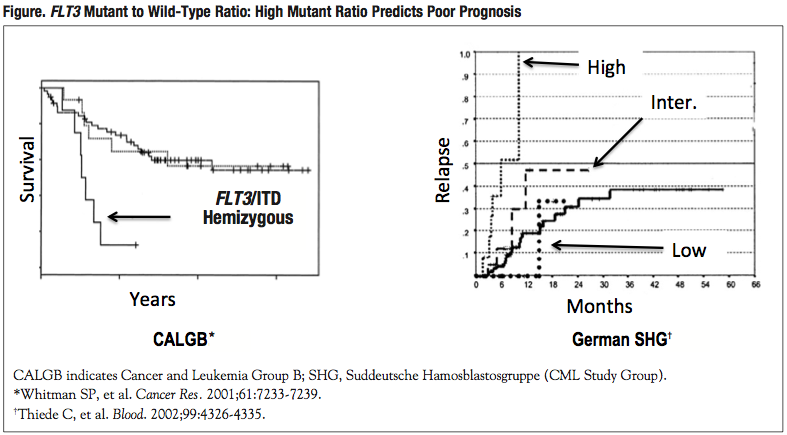 Conclusion
Molecular profiling is now essential to manage AML, as the number of tools to treat the disease is expanding, including cytarabine/daunorubicin, allogeneic transplant, all-trans retinoic acid, arsenic, and hypomethylating agents. FLT3 tyrosine kinase inhibitors are close to approval as maintenance therapy, and isocitrate dehydrogenase inhibitors are in the pipeline.

Patients can be successfully managed with minimal opioid medication after urologic oncology surgery, said Kerri Stevenson, MN, NP-C, RNFA, CWOCN, Lead Advanced Practice Provider â€“ Interventional Radiology, Stanford Health Care, CA, at the 2018 ASCO Quality Care Symposium. She presented results from a 4-month study conducted at Stanford Health Care. Over the course of the study, patients were able to decrease their opioid use after surgery by 46%, without compromising pain control.