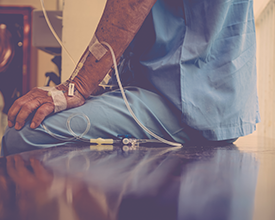 New results from the international, randomized, phase 3 clinical trial QuANTUM-R show that the targeted drug quizartinib, an oral, selective FLT3 inhibitor, significantly extended overall survival compared with chemotherapy in patients with relapsed or refractory acute myeloid leukemia (AML) and the FLT3-ITD mutation, the most common FLT3 gene mutation, affecting approximately 25% of patients with AML. These results from QuANTUM-R make quizartinib the first FLT3 inhibitor to demonstrate such improvement over chemotherapy in this patient population.

“Single agent quizartinib is the first FLT3 inhibitor to show a significant improvement in overall survival compared to cytotoxic chemotherapy in a randomized phase 3 study of patients with relapsed/refractory AML with FLT3-ITD mutations, a very aggressive form of the disease with limited treatment options,” said Antoine Yver, MD, MSc, Executive Vice President and Global Head, Oncology Research and Development, Daiichi Sankyo, in a press release from the company.

Treatment options for patients with relapsed or refractory AML and the FLT3-ITD mutation are limited, and no therapy targeting the FLT3-ITD mutation has yet been approved by the US Food and Drug Administration (FDA). Patients with AML and this mutation have a poor prognosis, characterized by increased risk for relapse and death, as well as an increased risk for relapse after hematopoietic stem-cell transplant (HSCT) compared with patients who do not have this mutation.

In QuANTUM-R, 367 patients with relapsed or refractory AML and the FLT3-ITD mutation who had received standard first-line therapy, with or without HSCT, were randomized in a 2:1 ratio to quizartinib or to salvage chemotherapy. Quizartinib met the study’s primary end point, which was whether quizartinib monotherapy extended overall survival compared with salvage chemotherapy. In addition, the study results demonstrated that the safety of quizartinib was consistent with that observed at similar doses in an ongoing comprehensive development program for the drug, which includes the QuANTUM-First trial, and a variety of combination trials.

The FDA granted quizartinib an orphan drug designation for the treatment of patients with AML, as well as a fast track status for relapsed or refractory AML. Based on these new results from QuANTUM-R, Daiichi Sankyo will start the global regulatory submissions for quizartinib in the setting of AML with FLT3-ITD mutation.