B cells circulate between multiple sites in the body during their normal life cycle, and these B cells rely on cues from the support of microenvironments to promote proper development, maturation, and function.1 Chemotaxis to, and adhesion within, proliferative microenvironments, as well as intracellular prosurvival signaling that promotes growth and prevents cell death, are necessary for normal B-cell function and survival.1 Constitutive activation of B-cell receptor signaling appears to be essential for the survival and proliferation of malignant B cells, an observation that has led to the design of inhibitors of B-cell receptor–associated kinases.2 In B-cell malignancies, some normal biologic processes become dysregulated, resulting in increased proliferation, trafficking, and adhesion of malignant B cells within supportive microenvironments.1 Signaling through chemokine receptors mediates B-cell trafficking, chemotaxis, and adhesion to these proliferative niches.3,4 Additionally, certain malignant B cells may have increased prosurvival signaling through the B-cell antigen receptor (BCR), which is fundamental to B-cell activation.3,4

Bruton’s tyrosine kinase (BTK) is one of the essential effectors of all of these processes.5 BTK is a signaling molecule of the BCR and cytokine receptor pathways.6 BTK’s role in signaling through the B-cell surface receptors results in activation of pathways necessary for B-cell trafficking, chemotaxis, and adhesion.6

Compelling evidence suggests that crosstalk with accessory stromal cells in specialized tissue microenvironments, such as the bone marrow and secondary lymphoid organs, favors disease progression in hematologic cancers by promoting malignant B-cell growth and drug resistance.7 Therefore, disrupting the crosstalk between malignant B cells and their milieu is an attractive strategy for treating selected mature B-cell malignancies.7,8

Ibrutinib (PCI-32765) is a selective and irreversible small molecule inhibitor of BTK that inhibits BCR signaling in human B cells via specific active-site occupancy.9 Ibrutinib forms a covalent bond with a cysteine residue in the BTK active site, leading to inhibition of BTK enzymatic activity.6,10,11

In vivo and in vitro studies* have shown that ibrutinib affects 3 key malignant B-cell processes (Figure): inhibits proliferation and survival, inhibits adhesion (binding to other cells in the microenvironment), and modulates chemotaxis (migration of B cells in and out of lymphatic tissue).6,9,12-15 In addition, data suggest that ibrutinib decreases interactions between malignant cells and the microenvironment. 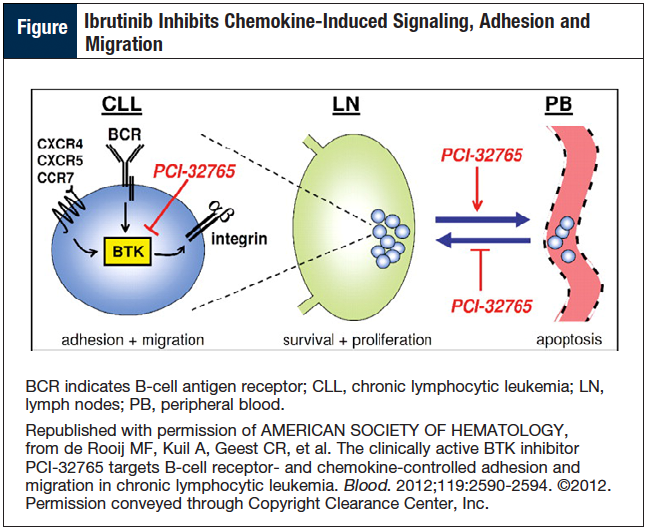 Ibrutinib is indicated for the treatment of 6:

*Correlation to clinical effect has not been established.