The MAPK pathway is constitutively activated in the majority of melanomas as a result of molecular alterations in genes encoding key components of the pathway (eg, BRAF and NRAS mutations) or upstream cell surface receptors (eg, KIT), resulting in uncontrolled tumor proliferation and survival (Figure 1).1 Among patients with metastatic melanoma, approximately 50% have a BRAF mutation, in which overexpressed BRAF and MEK proteins disrupt the normal regulation of cell growth and death, leading to increased cancer cell production and survival.2-4 The most commonly observed BRAF mutations, BRAF V600E and BRAF V600K, account for approximately 75% to 85% and 10% to 30% of all BRAF mutations in metastatic melanoma, respectively.5,6

Some mutations in the BRAF gene, including those that result in BRAF V600E, can result in constitutively activated BRAF kinases that may stimulate tumor cell growth.7 Dabrafenib inhibits BRAF V600 mutation–positive melanoma cell growth in vitro and in vivo.7 Dabrafenib was approved by the FDA in 2013 as a single agent for the treatment of BRAF V600E mutation–positive unresectable or metastatic melanoma.

Trametinib is a reversible inhibitor of MEK1 and MEK2 activation and of MEK1 and MEK2 kinase activity.8 MEK proteins are upstream regulators of the ERK pathway, which promotes cellular proliferation. BRAF V600E mutations result in constitutive activation of the BRAF pathway, which includes MEK1 and MEK2.9 Trametinib inhibits BRAF V600 mutation–positive melanoma cell growth in vitro and in vivo.9 Trametinib was approved by the FDA in 2013 as a single agent for the treatment of BRAF V600E or BRAF V600K mutation–positive unresectable or metastatic melanoma.

Combination of Dabrafenib and Trametinib

Compared with chemotherapy, targeted inhibition of the MAPK pathway with the BRAF inhibitor dabrafenib improves the progression-free survival (PFS) and overall survival (OS) of patients who have metastatic melanoma with BRAF V600 mutations.2 However, acquired resistance to BRAF inhibitor monotherapy frequently develops through reactivation of the MAPK pathway, resulting in a median PFS of 6 to 8 months.2,10 In addition, the use of BRAF inhibitor monotherapy may result in the development of secondary skin tumors, originating from a paradoxical activation of the MAPK pathway in cells without a BRAF mutation.11 Single-agent trametinib, compared with chemotherapy, improves the OS of patients with BRAF V600 mutation–positive metastatic melanoma and is not associated with paradoxical activation.12 Combining the BRAF inhibitor dabrafenib with the MEK inhibitor trametinib (Figure 2) addresses the limitations of single-agent BRAF inhibitors and results in a significant delay in the emergence of resistance, with a longer median PFS than with dabrafenib alone, as well as a decreased incidence of BRAF inhibitor–induced skin tumors.13,14 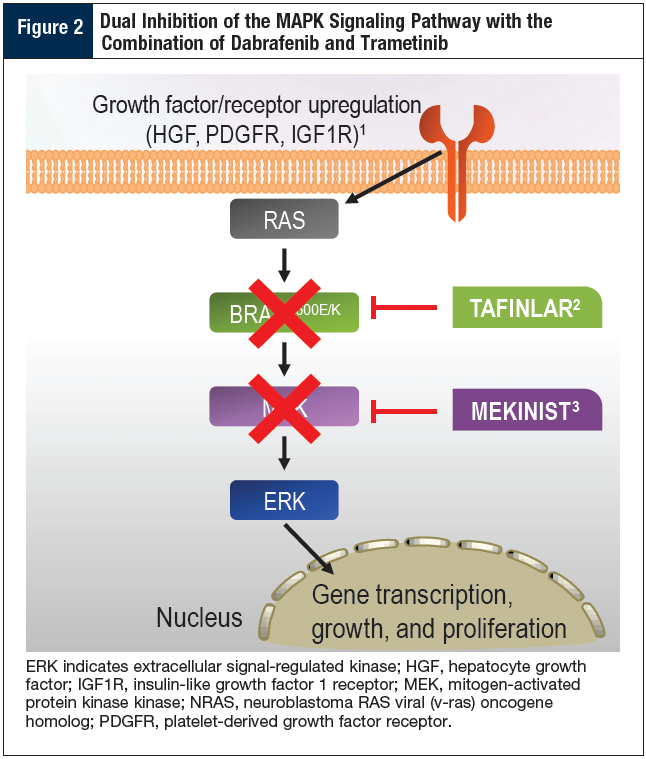 The FDA granted accelerated approval to trametinib and dabrafenib for use in combination in the treatment of patients with unresectable or metastatic melanoma with a BRAF V600E or BRAF V600K mutation as detected by an FDA-approved test.15 Approval of the combination therapy was based on the demonstration of durable objective responses in a multicenter, open-label, randomized, active-controlled, phase 1/2 study of 162 patients with histologically confirmed stage IIIC or IV melanoma harboring a BRAF V600E or BRAF V600K mutation who had not previously received BRAF or MEK inhibitors.15 Results from this study showed objective response rates and response duration were 76% (95% CI, 62-87) and 10.5 months (95% CI, 7-15), respectively, in the group of patients receiving trametinib-dabrafenib combination therapy and 54% (95% CI, 40-67) and 5.6 months (95% CI, 5-7), respectively, in the group of patients who received single-agent dabrafenib.15 The incidence of cutaneous squamous cell carcinoma (including squamous cell carcinomas of the skin and keratoacanthomas) was 7% (95% CI, 2-18) in the trametinib-dabrafenib combination arm compared with 19% (95% CI, 9-32) in the single-agent da­brafenib arm.15 The most frequent adverse reactions (≥20% incidence) from trametinib in combination with dabrafenib were pyrexia, chills, fatigue, rash, nausea, vomiting, diarrhea, abdominal pain, peripheral edema, cough, headache, arthralgia, night sweats, decreased appetite, constipation, and myalgia. The most frequent grade 3/4 adverse events (≥5% incidence) were acute renal failure, pyrexia, hemorrhage, and back pain.15 Serious adverse drug reactions occurring in patients taking trametinib in combination with da­brafenib were hemorrhage, venous thromboembolism, new primary malignancy, serious febrile reactions, cardiomyopathy, serious skin toxicity, and eye disorders such as retinal pigmented epithelial detachments.15

Granting of this accelerated approval was contingent on the successful completion of the phase 3 COMBI-d (NCT01584648) study to verify the clinical benefit of trametinib for use in combination with dabrafenib. This randomized, double-blind study compared the combination of dabrafenib and trametinib to single-agent therapy with dabrafenib and placebo in 423 patients with unresectable (stage IIIC) or metastatic (stage IV) BRAF V600E/K mutation–positive cutaneous melanoma. In May 2015, results from the final, planned statistical analysis of the COMBI-d study showed a statistically significant reduction in the risk of death (hazard ratio, 0.71; 95% CI, 0.55-0.92; P = .011) and a statistically significant OS benefit (median of 25.1 months vs 18.7 months) for the combination of dabrafenib and trametinib compared with dabrafenib monotherapy in patients with BRAF V600E and BRAF V600K mutation–positive metastatic melanoma.16 The analysis for the combination also showed a median PFS of 11.0 months (compared with 8.8 months in patients treated with dabrafenib alone), an overall response rate of 69%, and a median duration of response of 12.9 months. The safety profile was consistent with the profile observed to date for the combination; no new safety concerns were observed.

The Evolving Role of Precision Medicine in Clinical Practice