More than 90% of cases of B-cell precursor acute lymphoblastic leukemia (ALL) express CD19 in more than 20% of malignant cells, the intensity of expression being sufficient to make this therapy suitable in ALL.4

Blinatumomab activates endogenous T cells by connecting CD3 in the T-cell receptor (TCR) complex with CD19 on benign and malignant B cells (Figure).1,3 The nonimmunogenic linker protein that binds the anti-CD19 and anti-CD3 antibodies enables a great degree of rotational flexibility, which allows for close proximity of malignant CD19-positive B cells to CD3-positive T cells, favoring direct lysis.4 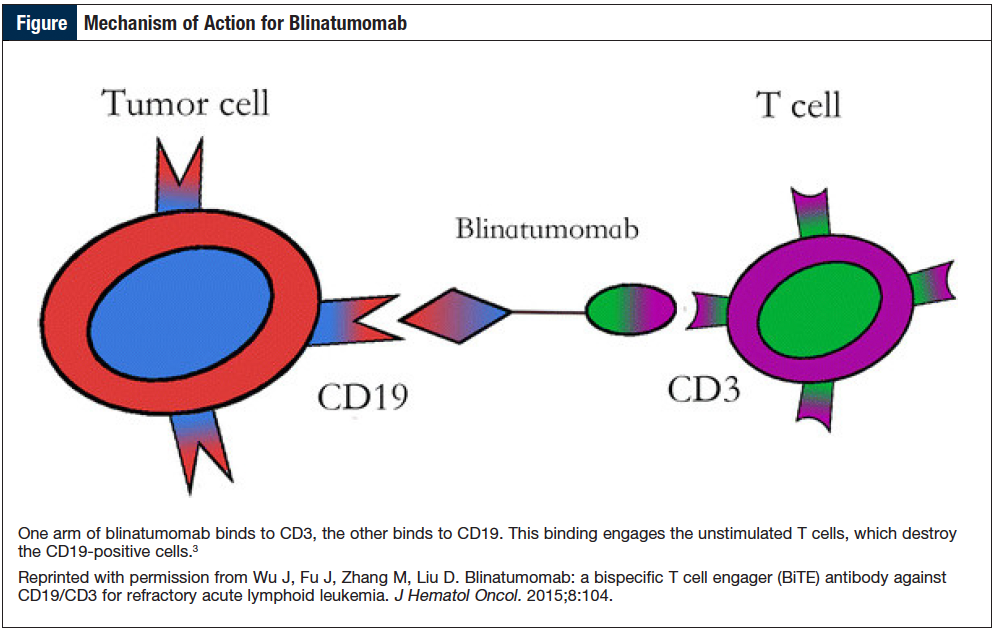 Furthermore, blinatumomab-activated T cells are capable of serial killing of the CD19-positive target cells. One hypothesis for this serial lysis lies in the preferential binding of CD19 compared with CD3, which potentially allows the T cells to be released from the target cells, enabling them to bind to additional target B cells. The T-cell proliferation and the serial killing of CD19-positive B cells induced by blinatumomab explain why this monoclonal antibody is also effective in patients with a limited number of T cells due to prior intensive therapy or early after hematopoietic stem cell transplantation.5-9

On December 3, 2014, the FDA granted accelerated approval for blinatumomab for the treatment of Philadelphia chromosome–negative relapsed or refractory B-cell precursor acute lymphoblastic leukemia (R/R ALL).10 The approval was based on the achievement of durable complete remission (CR) and response with a reduction in minimal residual disease (MRD) to less than 10–4 in a multicenter single-arm study (Protocol MT103-211, or the ’211 study) that enrolled 185 patients with R/R ALL.11,12 Results showed that 32% (95% CI, 26%-40%) of patients with R/R ALL attained a CR with 2 cycles of treatment with single-agent blinatumomab, and the response was durable (median, 6.7 months; range, 0.46-16.5 months). Furthermore, 31% (95% CI, 25%-39%) of patients in the study had a CR with or without complete hematological recovery but with reduction in MRD to <10–4. Safety was evaluated in 212 patients with R/R ALL treated with blinatumomab. The most common adverse reactions (≥20%) were pyrexia (62%), headache (36%), peripheral edema (25%), febrile neutropenia (25%), nausea (25%), hypokalemia (23%), rash (21%), tremor (20%), and constipation (20%). A neurologic toxicity occurred in approximately 50% of patients and was a frequent reason for interruption of therapy. Blinatumomab activates endogenous T cells when bound to the CD19-expressing target cell, and activation of the immune system results in release of inflammatory cytokines. Cytokine release syndrome, including life-threatening or fatal events, was reported in 11% of the patients.

Triple-negative breast cancer is considered one of the most difficult to treat breast cancers, with few treatment options, but finally a breakthrough study shows progress by extending patient survival. Results of the phase 3 ­IMpassion130 clinical trial show that using the checkpoint inhibitor atezolizumab (Tecentriq), a PD-L1 inhibitor, with nab-paclitaxel [ Read More ]