ALK has been found to fuse with other partners, leading to potent malignant transformation.1,2 The most common among ALK fusion genes in lung cancer, specifically non–small cell lung cancer (NSCLC), is the EML4 ALK translocation fusion gene (EML4-ALK).1,3-5

The relative prevalence of ALK translocation mutations among lung adenocarcinoma patients is rather low in comparison with EGFR and KRAS mutations; the chromosomal translocation EML4-ALK may be present in approximately 3% to 6% of patients.6-8 However, the ALK rearrangement is frequently observed in relatively younger patients, nonsmokers or light smokers, and those whose histology is without other genetic disorders, such as mutations of the EGFR gene.1,9

Crizotinib, approved by the FDA in 2011, was the first clinically available ALK tyrosine kinase inhibitor, showing remarkable activity against ALK-rearranged NSCLC.1,10 However, resistance to crizotinib inevitably develops, with the brain being a common site of relapse.1,11,12

Alectinib is a highly selective, next-generation ALK inhibitor with potent inhibitory activity, including against ALK mutations conferring resistance to crizotinib.11 In a phase 1/2 study from Japan, alectinib was found to be highly active and safe in crizotinib-naive, ALK-rearranged NSCLC patients. Alectinib also demonstrated promising antitumor activity in crizotinib-resistant patients, including those with central nervous system metastases. Based on these data, the drug received breakthrough therapy designation by the FDA in 2013 for patients with ALK-positive NSCLC whose disease progressed on crizotinib.13 An ongoing, global, randomized phase 3 study is comparing alectinib to crizotinib as first-line treatment in patients with advanced NSCLC whose tumors were characterized as ALK-positive by a companion immunohistochemistry test.13 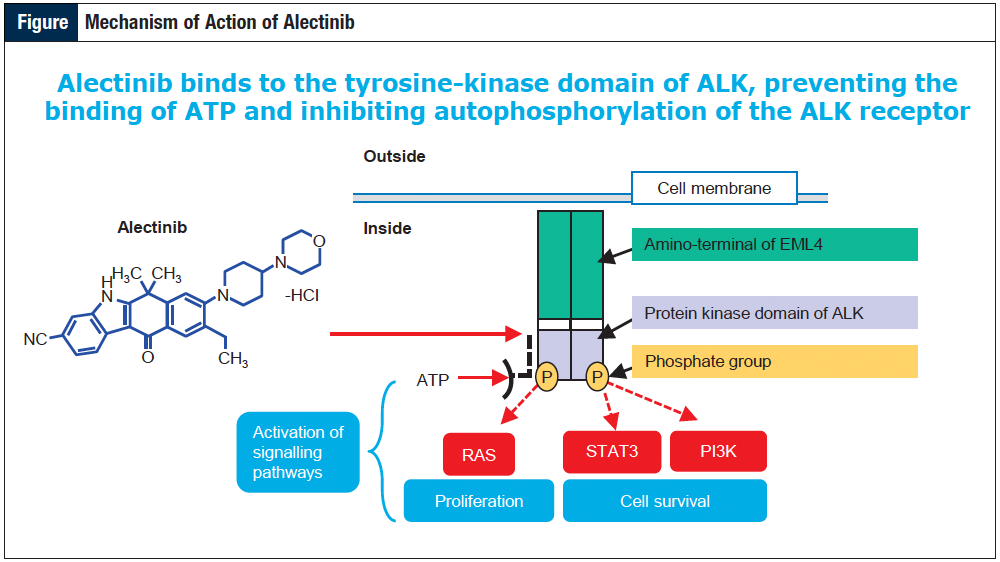 In my medical oncology practice at Johns Hopkins, I see approximately 4 patients with nonmetastatic NSCLC per week. Most of these patients are referrals from either pulmonary medicine or thoracic surgery. A patient with early stage disease initially sees a pulmonologist for diagnosis and may then be referred to a thoracic surgeon. The thoracic surgeon may refer the patient to us in medical oncology if there is an indication to enroll the patient in a clinical trial or for systemic therapy. In a community oncology practice, patients tend to go to surgery first and are then referred to the medical oncologist for adjuvant chemotherapy. In academic centers, it is more common for patients to be seen in a multidisciplinary setting.